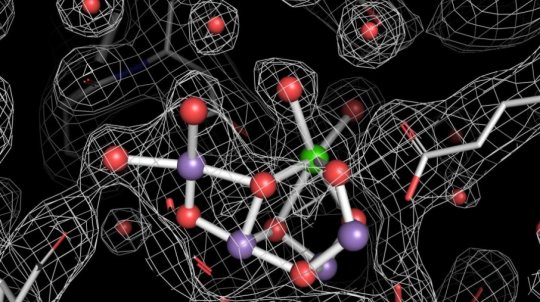 In a new article published in Nature an international research team presents high-resolution images of photosystem II, the protein complex that splits water into hydrogen ions and oxygen during photosynthesis. The images will help researchers better understand this complex mechanism, possibly opening up the door to developing cheap and efficient solar fuel devices.

When Earth was formed, the atmosphere was rich in carbon dioxide and no free oxygen molecules were present. Early life forms, comparable to present day microorganisms, satisfied their energy needs initially by ‘eating’ small energy-rich molecules. Subsequently, some ‘discovered’ how to harvest solar energy and store it in energy-rich molecules such as sugars, but it was not until these early life forms could extract electrons and protons from water molecules that evolution took a huge turn and allowed the development of life as we know it. This tremendous explosion of biological diversity was possible because of the abundance of water and solar energy. The by-product oxygen in turn enabled the evolution of complex animals after accumulating in the atmosphere.

It is now nearly 50 years since Bessel Kok established that biological water oxidation in photosystem II involves a five-step reaction cycle of a catalyst that accumulates four oxidising equivalents before water oxidation proceeds in a fast concerted reaction. Although high-resolution structures of the dark-stable state of photosystem II have been obtained in recent years, the structural changes that occur during the five-step reaction cycle remained largely unknown.

Using ultrashort (femtosecond) X-ray laser pulses delivered by the X-ray free electron laser near Stanford, USA, an international team of researchers has now managed to obtain high-resolution images of photosystem II and its remarkable water-splitting catalyst of all four stable states of the reaction cycle, as well as snapshots of reaction steps between some stable states. The research group of Johannes Messinger, chair of Molecular Biomimetics at the Department of Chemistry at the Ångström Laboratory at Uppsala University in Sweden was a part of the team.

“I have been working for 30 years now to understand the mechanism of water oxidation in photosynthesis. This result is a dream come true! These new images will facilitate understanding this complex reaction on a level of detail previously thought impossible,” says Johannes Messinger.

Researchers expect that understanding how photosystem II can activate the cheap and abundant metal ions calcium and manganese to form one of the best water-oxidation catalysts available to date, will allow chemists to do the same. This would open the door to developing cheap and efficient solar fuel devices that store solar energy in the bonds of molecular hydrogen or other solar fuels obtained by carbon dioxide or nitrogen reduction.

“Solar fuels are carbon-free or carbon-neutral. They will be needed in addition to batteries to turn the present fossil fuel based energy system into a renewable energy economy. The need of solar fuels is obvious if one realises that world-wide 80 per cent of present day energy consumption is fuel based. Even in Sweden more than 50 percent of the energy is used in form of fuels and only 34 percent as electricity,” says Johannes Messinger.