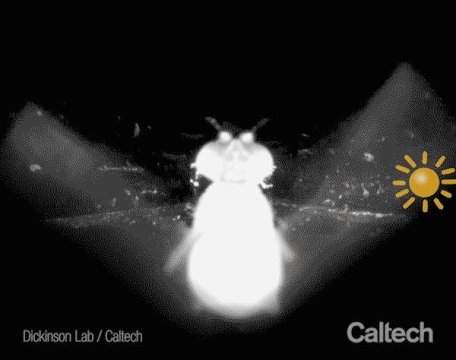 What do ancient seafaring explorers and fruit flies have in common? Caltech researchers have discovered that, similar to nautical navigators of old, fruit flies use celestial cues like the sun to navigate in straight lines.

The research is described in a paper appearing online on August 30 in the journal Current Biology. The work was done in the laboratory of Michael Dickinson, Esther M. and Abe M. Zarem Professor of Bioengineering and Aeronautics. Dickinson is an affiliated faculty member of the Tianqiao and Chrissy Chen Institute for Neuroscience at Caltech.

Imagine you’re wandering alone through a vast desert — the landscape is barren and the sun is blazing. There are no landmarks to guide you, but accidentally going in circles could mean death. Whatever direction you choose, you need to be able to head straight.

This is the conundrum of Drosophila, the common fruit fly, in the desert. Almost 40 years ago, a study found that fruit flies can fly up to nine miles in one night in search of food and water. How are these tiny insects able to navigate such long distances?

“For flies crossing inhospitable territory, flying around in circles would be really dangerous — they’re less likely to find any food or water,” says postdoctoral scholar Ysabel Giraldo, the study’s first author. “Surprisingly, fruit flies are seasonally found in environments like the Mojave Desert. They must get there from somewhere, and once there, they must figure out how to get around.”

Giraldo and her collaborators found that fruit flies navigate using the sun as a landmark. The researchers placed flies in a “flight simulator” — a kind of virtual reality where they are held in place but can still move their wings in response to visual stimuli. The researchers found that a fly will fix a small, bright spot (the simulated sun) in one position within its field of vision and fly straight with respect to that position. When the team removed this landmark and reintroduced it a few hours later, the same fly could remember and adopt its former orientation, or heading. Each fly they tested selected a different heading, suggesting that under natural conditions, flies in a group would disperse in many directions.

“It was a bit surprising to find that the same pesky little flies that flit around fruit bowls and wine glasses have the capacity to navigate for many miles using the sun,” says Dickinson.

The research also shows that these flies have so-called compass neurons in their brains that seem to be associated with this navigational behavior. Genetically silencing these neurons (rendering them unable to function) removed a fly’s ability to create a heading based on the sun. Instead, the fly adopted a more simple, reflexive behavior of flying straight towards the light. Using genetic tools, Giraldo and her team were also able to modify these neurons so that they would fluoresce according to the neurons’ activity levels. Then, by making a very tiny hole in the fly’s head and using a powerful microscope, the researchers could watch neural activity while the fly was in the simulator.

“Insects have been navigating for many millions of years, so we think of this as a very ancient toolkit,” says Giraldo. “We know a fair bit about navigation in other insects like Monarch butterflies and locusts — seasonally migrating insects whose behaviors are noticeable or affect us directly. Although relatively little is known about how fruit flies navigate and disperse, the availability of genetic tools for Drosophila makes them a powerful system to understand the mechanisms underlying behavior. In fact, because the anatomy or architecture of Drosophila brains is very similar to these other insects’ brains, what we learn from fruit flies is likely to be relevant to them.”

The next steps for this research, according to Giraldo, are multifaceted.

“There are several different directions we can go with this work,” she says. “For example, we know the compass neurons must be one part of a more complex navigational circuit, and we’d like to explore that circuit. If the flies are remembering their heading over time, how do they do that? We’re also examining whether there are seasonal differences in navigation patterns by taking flies that are basically genetically identical and rearing them at different temperatures and daylengths. Does rearing condition cause behavioral differences? It’s related to the question of how and why flies get to inhospitable environments at various times of the year.”