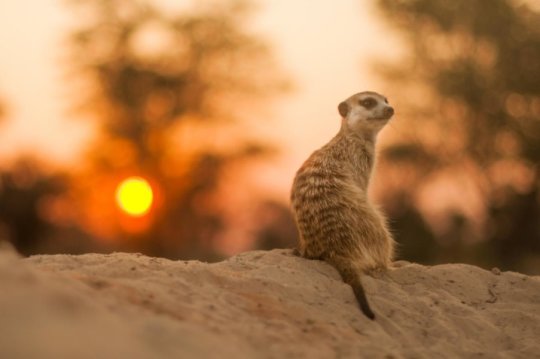 In many cooperative species, the dominant breeders live longest despite the wear-and-tear of leadership and reproduction.

It has even been suggested these breeders hold the secret of immunity to age-related diseases. Some social insects, such as bees, do have breeders with genetic profiles that delay ageing — but this has never been documented in our fellow mammals.

Scientists from the University of Cambridge have now investigated the lifespans of meerkats: a highly social mammal that lives in groups of up to fifty, where a single dominant couple produce around 90% of the pups.

The researchers found that the DNA of dominant breeders actually shows signs of accelerated ageing — yet they still consistently outlive the non-breeding subordinates in the group. Their study shows that dominants live an average of 4.4 years compared to subordinates 2.8 years.

This is because meerkat underlings are forced to take the often-fatal risk of leaving the safety of the group to find breeding opportunities, say scientists. Dominants rarely tolerate rival breeders, and violently eject subordinates from the group if they feel threatened.

On reaching the top of the social pecking order, however, meerkats remain ensconced within the group. The study shows an average subordinate spends more than six days each year in the wilderness, with this figure rising year-on-year. Dominant breeders are typically absent for under two hours per year.

“Dominant meerkats typically die due to internal stresses on their bodies, resulting in gradual, predictable declines until death. In humans we might describe this as ‘natural causes’,” said Dr Dominic Cram from Cambridge’s Department of Zoology, lead author of the study published today in Current Biology.

“Subordinate meerkats die due to sudden, unpredictable circumstances such as exposure to predators, killing them instantly. A meerkat’s place within the social group shapes the mortality risks it faces,” he said.

“The secret of long life for meerkats is not to battle the inevitable declines of ageing, but to be the ruler of your community, profiting from social support and cracking down on would-be rivals.”

Cram conducted the research as part of the Kalahari Meerkat Project: a long-term study of social behavior and ecology, run for over twenty years at the University of Cambridge by Professor Tim Clutton-Brock — a leading figure in the study of mammal societies.

The project has helped train generations of zoologists through the observation of generations of meerkats, resulting in a wide range of data on the life histories of over 3000 meerkat individuals in over 100 groups.

The team collected blood samples from the meerkats, and measured DNA sections called telomeres that help protect DNA from damage — much like the plastic caps on shoe-laces. As they erode over time, the chance of unravelling increases, so the length of telomeres can be used to estimate “biological age.”

While the telomeres of subordinate meerkats remained stable, dominant telomeres shrunk by a third in just 18 months — suggesting accelerated ageing caused by the toils of raising young and fending off rivals.

Yet the dominant meerkats still lived an average of 60% longer than subordinates, as the lower ranking meerkats were increasingly forced to risk more and more time outside the group as they grew older.

“Each year the subordinates spend over triple the amount of time outside the group as the previous year, reaching a peak of 35 days per year, or 10% of their time, outside the social group,” said Cram.

For subordinate males, all females in the group are their sisters or mother, so they must court females away from the group to avoid inbreeding. Subordinate females are bullied and chased away by the dominant when they become a reproductive rival.

Of all those that leave, some return — or try to — after a few days or weeks. A lucky few start their own group and become dominant breeders. Many are never seen again.

“Within a group, a sentinel always keeps look-out and sounds the alarm, allowing the meerkats to flee into burrows or bolt-holes. Each meerkat takes a turn on sentinel duty,” said Cram.

“Away from the group there is no early warning system, and meerkats are easy prey for eagles, goshawks and caracal. Letting down their guard to dig for food is too risky, so many starve for fear of being eaten.”

“Lone meerkats have even been known to be torn apart by members of a rival group. It’s a dangerous world for a solo meerkat.”