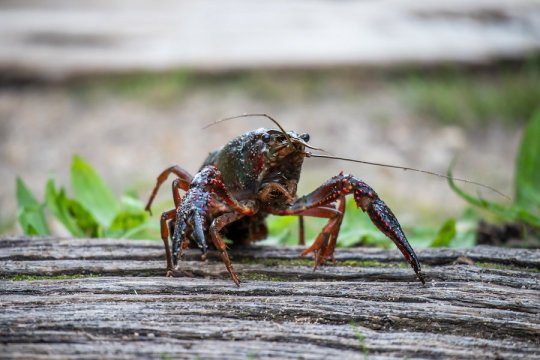 A study led by researchers at the Doñana Biological Station of the Spanish National Research Council (CSIC), in collaboration with institutions in Europe, America and Asia, has identified the main introduction routes of the red swamp crayfish, Procambarus clarkii, during its global-scale invasion. This North American species is the most widely spread freshwater crayfish worldwide, and is one of the worst invasive species due to its impact on the structure and functioning of freshwater ecosystems.

The researchers have reconstructed the invasion routes followed by the red swamp crayfish during its human-driven expansion based on the analysis of a mitochondrial gene (COI), which was sequenced from 1,412 crayfishes from 122 populations across the Northern Hemisphere.

The article describes how different invasion scenarios have produced different genetic patterns among invasive populations. “For example, in the US there are two main invasion routes: westward and eastward from the native area. The invasive populations in the west are genetically more diverse, because they have received more introductions, which probably involved more specimens of crayfish, starting in the 1920s,” explains Francisco J. Oficialdegui, CSIC researcher at the Doñana Biological Station.

The red swamp crayfish was introduced twice from Louisiana to south-western Spain in 1973 (near the city of Badajoz) and 1974 (in the marshes of the Guadalquivir River). These introductions were promoted by the aristocrat Andrés Salvador de Habsburgo-Lorena. Until now, it has been assumed that these introductions were the sole origin of all red swamp crayfish populations established across Europe, but the new study finds evidence of a separate later introduction.

“The large number of individuals involved in the two introduction events (around 500 in Badajoz and 6,000 in the Guadalquivir marshes) has led to the high genetic diversity levels we observed in Iberian populations, although diversity values tend to be lower as populations are further away from the introduction foci. However, in our study we also unexpectedly detected a genetic profile in central-western Europe that is not present in the Iberian Peninsula, a finding that suggests that additional unrecorded introductions of the red swamp crayfish into Europe may have occurred, either from the US or from other invaded territories,” adds Oficialdegui.