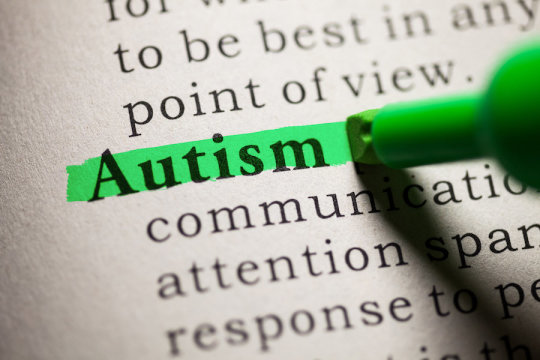 Changes in gene activity in specific brain cells are associated with the severity of autism in children and young adults with the disorder, according to a UC San Francisco study of postmortem brain tissue. The study’s new insights into how specific changes in gene expression contribute to the disease’s symptoms by altering the function of brain circuits provides an important foundation for the development of treatments for the disorder, the authors say.

Scientists have learned in recent years that autism spectrum disorders (ASDs) are typically caused by changes in the genetic instructions for how the developing brain wires itself up, beginning in the second trimester of pregnancy and continuing through early childhood. It is far less clear how the mature brain circuitry produced by those garbled instructions differs in people with autism or how these changes produce the social communication difficulties; restricted, repetitive behaviors; and other symptoms that define the disorder. This is one of the reasons there are currently no medical therapies to reverse or treat these symptoms, say the authors of the new study.

“Identifying genetic changes that occur at conception or in utero is important for understanding the causes of autism, but these insights are unlikely to result in useful therapeutic targets,” said senior author Arnold Kriegstein, MD, PhD, a professor of neurology and member of the UCSF Weill Institute for Neuroscience who directs UCSF’s Eli and Edyth Broad Center for Regeneration Medicine and Stem Cell Research. “By the time children are diagnosed with autism, all of the things that went wrong have happened already, and the patients are left with a circuit dysfunction that has now matured. If we want to be able to offer treatments to these children when they come to our attention, it’s the altered brain circuits that we’re going to have to tackle.”

In the new study — published in the May 17, 2019 issue of Science — researchers led by Dmitry Velmeshev, PhD, a postdoctoral scholar in Kriegstein’s lab, set out to understand how the brains of people diagnosed with autism differ from non-autistic brains at the neural circuit level by using novel techniques to look for differences in gene activity in specific types of brain cells.

Studying single-cell differences in gene expression by sequencing molecules of RNA — which reveal which genes are turned on in particular cells — has been the frontier of biology in recent years, but has been hard to apply to adult brain tissue, since teasing out individual cells from the elaborately tangled circuitry of the brain is a bit like playing Jenga with Jell-o. Instead, Velmeshev and colleagues used even newer techniques to extract RNA from cell nuclei isolated from samples of brain tissue and then identify the type of cell the genetic material had come from after the fact based on signature patterns of gene expression. This allowed the researchers to look for biological differences in specific cell types and circuit components in the brains of individuals with autism.

The researchers applied this single-nuclei sequencing approach to snap-frozen post-mortem samples of prefrontal cortex and anterior cingulate cortex — two brain regions previously shown to behave differently in patients with autism — provided by the National Institutes of Health (NIH) NeuroBioBank and University of Maryland School of Medicine Brain and Tissue Bank. They compared brain samples from 15 people with autism who died between the ages of four and 22 with brain samples from 16 people who died in the same age range of non-neurological causes. Since many of the patients with autism also suffered from seizures, the researchers also examined brain samples from patients with epilepsy to identify brain changes more likely to stem from seizures than from autism itself.

Their analysis of more than 100,000 cell nuclei from these brain samples found that brains of people with autism contained a common set of changes in genes involved in synaptic communication between neurons. These changes were found specifically in cells in the uppermost layers of the neocortex that are responsible for local information processing. They also found changes in non-neuronal brain cells called glia that could impact their role in pruning and maintaining healthy neural circuits.

Many of the genes the researchers found to be expressed differently in the brains of people with autism are known to be widely expressed across the entire brain, but only in these cells did they appear to be significantly altered in the disease. Remarkably, the extent of changes in gene expression in these very specific groups of cells was closely correlated with the severity of patients’ behavioral symptoms.

Researchers have long feared that a disorder with such diverse symptoms and genetic causes as ASDs would be so variable at the neurological level that each individual would essentially require a unique form of treatment. The fact that the researchers were able to identify a common set of circuit changes among a diverse set of patients of different ages and genetic backgrounds offers new hope that one day there could be a common treatment for many people with the disorder.

“It was very exciting to see such clear convergence on specific cell types that appear to be altered in all of these patients,” Velmeshev said. “This offers hope that some point in the future there could be a widely applicable therapy for many different patients with the disease.”

READ  Study: How to suck carbon dioxide from the sky for fuels and more --

On the other hand, Velmeshev and Kriegstein noted that the finding that these common genetic changes are highly specific to certain cell types in the brain presents a significant challenge, as any treatment would also have to be exquisitely specific to these affected cell types.

To better understand exactly how the specific cellular changes they identified in this study impact the functioning of neural circuits in patients with autism, the researchers plan to recreate these alterations in three-dimensional “organoid” models of brain development that can be grown in the lab from patients’ skin cells.

“It’s important to remember that we are looking at downstream effects of changes that occurred during early brain development, so the changes we are seeing are likely a mix of the actual causes of autism symptoms as well as ways these neurons are trying to compensate to maintain normal activity,” Velmeshev said. “Figuring out exactly which of these changes are the best potential targets for therapies is one of the many questions this new kind of data is opening up for future study.”

This work was supported by Simons Foundation (Pilot award 515488), the National Institute of Mental Health (1U01MH114825-01) and a QB3 institute BOLD & BASIC Fellowship.