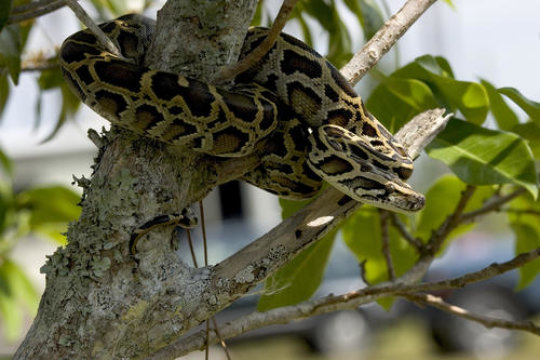 A new genetic analysis of invasive pythons captured across South Florida finds the big constrictors are closely related to one another. In fact, most of them are genetically related as first or second cousins, according to a study by wildlife genetics experts at the U.S. Geological Survey.

The study also found that at least a few of the snakes in the invasive South Florida population are not 100 percent Burmese pythons. Instead, the genetic evidence shows at least 13 snakes out of about 400 studied are a cross between two separate species: Burmese pythons, which mostly inhabit wetlands, and Indian pythons, which prefer higher ground. The interbreeding between Burmese and Indian pythons probably took place before the animals became established in the South Florida environment, and may have given them greater adaptability in their new habitats.

The South Florida pythons spring from a tangled family tree, with consequences for the species’ future spread that are hard to predict, the USGS scientists said.

“The snakes in South Florida are physically identifiable as Burmese pythons, but genetically, there seems to be a different, more complicated story,” said Margaret Hunter, a USGS research geneticist and lead author on the study published in the journal Ecology and Evolution.

Burmese pythons have been reproducing in the Everglades since the 1980s, and have caused important environmental changes including the decline of small-mammal populations in South Florida.

The researchers analyzed tail tissue from about 400 Burmese pythons captured across a wide area, from southwest Florida and the Big Cypress National Preserve to the Everglades, southeast Miami-Dade County and the Florida Keys, between 2001 and 2012.

The researchers looked at nuclear DNA, which contains genetic material from both parents, to determine how much each animal had in common with others in the population. To express family relationships in statistical terms, they used a common type of calculation known as a relatedness value. For all snakes in the study, the average relatedness value was about midway between first and second cousins. That close kinship means the population as a whole is experiencing inbreeding, the researchers concluded.

When the researchers tested genetic material from a different part of the snakes’ cells-mitochondrial DNA, inherited solely from the mother-they were surprised to find genetic signatures from the Indian python in 13 snakes.

Sometimes interbreeding between related species “can lead to hybrid vigor, that is, the best traits of two species are passed onto their offspring,” Hunter said. “Hybrid vigor can potentially lead to a better ability to adapt to environmental stressors and changes. In an invasive population like the Burmese pythons in South Florida, this could result in a broader or more rapid distribution.”

“Our ability to detect Burmese pythons in the Greater Everglades has been limited by their effective camouflage and secretive behavior,” said Kristen Hart, a USGS research ecologist and a co-author on the study. “By using genetic tools and techniques and continuing to monitor their movement patterns, we have been able to gain a better understanding of their habitat preferences and resource use. The new information in this study will help scientists and wildlife managers better understand these invasive predators’ capacity to adapt to new environments.”

Materials provided by U.S. Geological Survey. Note: Content may be edited for style and length.