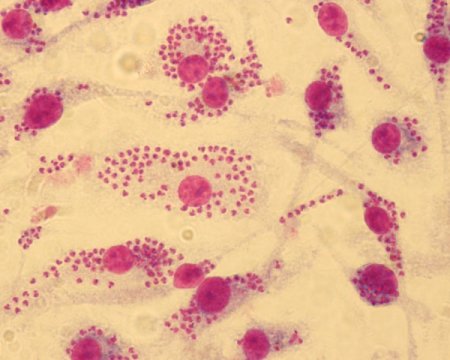 Leishmania is a microorganism that enters the human body via a sandfly bite. Instead of fleeing the white blood cells deployed by the immune system to destroy it, the parasite allows itself to be swallowed up. In doing so, Leishmania has developed the ideal strategy for continuing its life cycle, threatening the health of over 500 million people at risk of crossing its path in Africa, Europe, Asia, and the Americas.

Leishmaniasis, the disease caused by the parasite, has been on the radar of scientists for a long time, not only because of efforts to find treatment, but because the parasite makes an ideal model for study. Hence, numerous immune mechanisms have been elucidated by researchers thanks to the disease, including at INRS. However, the quest for affordable and effective treatment continues. INRS professors Albert Descoteaux and Steven LaPlante have developed a new, cost-effective strategy to rapidly identify molecules capable of eliminating Leishmania, a disease which can disfigure, disable, or kill its victims, especially in tropical areas.

“I have been studying this parasite for 30 years, and there is still a lot we do not understand,” says parasitologist Albert Descoteaux, who works to uncover the secrets of Leishmania, a genus encompassing some 20 single-celled species. In addition to its human victims, the parasite also targets some 70 other mammal species, according to the World Health Organization. Leishmania moves from an host to another by hitching a ride with tiny phlebotomine sandflies, which transmit the undesirable parasite when they bite.

According to the most recent estimates, 12 million people are currently affected by one form of leishmaniasis or another. There are three main forms: cutaneous, mucocutaneous, and visceral. “These are diseases that destroy lives — when they do not kill outright,” stresses Professor Descoteaux, adding that the pharmaceutical companies have little interest in developing treatments. “There is little commercial interest in neglected tropical diseases like leishmaniasis,” he points out. “It is the second-leading parasitic killer in the world, right behind malaria, yet there has been no real headway made on treatments in decades. There is currently no effective vaccine, and the available treatments all have major shortcomings, including serious side effects, high cost, and problems administering them in endemic areas.” He pauses before adding, “Unfortunately, as is the case with many other drugs, the parasite is also developing resistance. That is never good news.”

Albert Descoteaux, who is based at Centre INRS-Institut Armand-Frappier, is one of five INRS professors currently working on leishmaniasis. Their efforts to better understand the fundamental interaction between the parasite and its host account for one-third of all research activity on the disease in Canada, and their work is recognized worldwide.

Professor Steven LaPlante, who has been with INRS since 2015, specializes in drug discovery. With his colleague Albert Descoteaux, he has developed a project to identify new molecules that show promise for treating leishmaniasis. Their innovative approach is raising hopes of finding a more effective tool for developing drugs for leishmaniasis, but also for many other diseases.

The Challenge of Finding the Right Target

Having evolved its tactics and molecular machinery over millions of years, Leishmania has more than one trick up its sleeve. This is why there are so many obstacles to identifying molecules capable of eliminating the disease. For one thing, unicellular protists like Leishmania have more in common with mammal cells than with bacteria and viruses. “Like fungus, yeast, and worms, Leishmania are complex cells with a nucleus, and they have similarities to human cells,” notes the professor. “But they have taken a different evolutionary path, so there are lots of differences we need to identify and understand.”

Second, delivering a useful molecule to the parasite is a challenge. “Before it can kill Leishmania, the drug has to get past all kinds of barriers,” explains LaPlante.” It has to penetrate the infected cell without killing it or being too toxic. Then it has to reach and enter the protist to do its thing. Let’s just say that there are a lot of molecules to test before we find the right one for the job!”

Testing a lot of molecules is exactly the approach used by most researchers in the drug discovery process, but it takes extensive resources. Unfortunately, in the fight against leishmaniasis, there is little financial incentive for funding this kind of work. Yet given the prevalence of the disease worldwide, there are numerous calls for urgent action to find new treatments.

This is the context in which the two INRS researchers joined forces, drawing on their combined expertise in biology (Albert Descoteaux) and medicinal chemistry (Steven LaPlante). LaPlante has access to a special small-molecule library from which he selected 1,604 molecules that had the best chances of reaching Leishmania in the macrophages and preventing it from completing its life cycle. Compared to the molecule libraries maintained by pharmaceutical companies — which can hold up to two million molecules — his library represents a very modest number but have special properties which makes it easily manageable within the confines of a university research lab.

“We dubbed our approach Fragment-Based Phenotypic Lead Discovery, or FPLD,” says Professor LaPlante. “It’s a combination of tried and tested methods that hadn’t previously been adapted for leishmaniasis. We start by administering very small molecules to cultured cells and then observe the impact on the infection.”

In medicinal chemistry, several phases are required to develop a drug with multiple characteristics. The ideal molecule for fighting an infection should be non-toxic to humans, easy to administer, capable of reaching the infectious agent, affordable to produce, and, obviously, effective against the pathogen in question.

As is the case when designing any everyday object, different components of a drug are selected to perform different jobs. The components in question are molecular fragments. The goal of the two INRS professors was to identify which of these could stop Leishmania in its tracks. The idea is that effective fragments can be combined with other components serving various purposes — stability, delivery, absorption, and so on — to improve efficacy and end up with a viable drug.

“We’ve been very fortunate to be able to rely on our collaborator NMX Research and Solutions Inc. and General Manager François Bilodeau who donated all the molecules we needed for our study. It’s a huge contribution,” notes Professor LaPlante. NMX designed the molecular fragments at the INRS business incubator, where the young startup is based.

Yann Ayotte, lead author on the study recently published on the project, systematically — and very patiently — observed cultures treated with the fragments under the microscope, counting the number of parasites in the infected cells in order to compare them. The PhD student, who is currently continuing his research in Professor LaPlante’s lab, first joined the project as an intern in Albert Descoteaux’s lab at the end of his undergraduate degree. The two professors are quick to praise his outstanding dedication to his work.

After numerous experiments, the highly targeted screening of a small number of molecules allowed the team to identify two families of molecules showing high efficacy against Leishmania: indole and indazole derivatives. A dozen molecules have shown good potential, a very high number compared to other screening techniques.

Is there a new drug on the horizon? “For now, we are still at the very beginning of the process,” says Professor Descoteaux. “And you can’t skip any steps!” adds LaPlante. First, it’s essential to understand why the molecules have a leishmanicidal effect, a task that will keep Professor Descoteaux busy for a good while yet. In the mean time, the active molecule can be improved upon and “dressed up” with other appendages in order to fulfil all the criteria of an effective treatment — a job for Professor LaPlante and his team.

For Steven LaPlante, the most successful aspect of the project so far has been to show that a university lab can help identify potential new avenues for treatment. Pharmaceutical research does not cover all diseases or types of intervention, and from this perspective, academia can also play an important role.

The work of the team garnered enough enthusiasm that the journal ChemMedChem, published by ChemPubSoc Europe, a partnership of European chemical societies, rated it as a “Very Important Paper” and put it on the cover of the issue in which it appeared.

What will the study on the modes of action of the molecules identified at INRS reveal? “Research on Leishmania has lifted the veil on several properties of immune system we would not have been able to observe any other way,” affirms Professor Descoteaux. “Every time there is a new avenue to explore, we add to our knowledge on the immune system and on the biology of this parasite. Even if a new drug is still a long way away, these molecules will help us hone our understanding of the disease, which will keep us busy for years to come.”