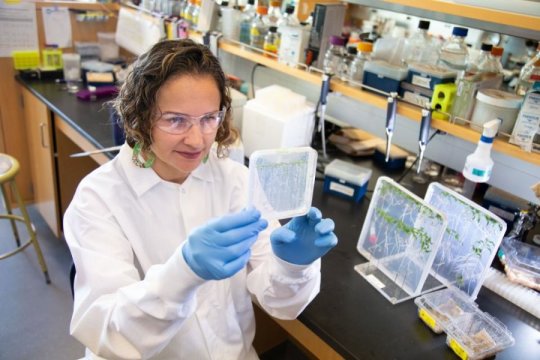 With robotics, computers and advanced genetics, researchers at the University of California, Davis and Cold Spring Harbor Laboratory are unraveling how plant roots take up and metabolize nitrogen, the key to plant growth and crop yield. Their latest work is published Oct. 24 in the journal Nature.

“Nitrogen metabolism is incredibly important for growth,” said Siobhan Brady, associate professor of plant biology at UC Davis and senior author on the paper. The invention of nitrogen fertilizers over a hundred years ago has enabled a massive expansion in agricultural productivity to feed billions of people. But at the same time, runoff of excess pesticides into soils, waterways and the oceans has many negative impacts.

By understanding the genes that control how plants take up and use nitrogen, scientists like Brady hope to give plant breeders tools to generate crop varieties that need less fertilizer or make better use of it.

“We know the genes that are involved in nitrogen assimilation and transport but we don’t understand all the ways that nitrogen metabolism is regulated,” Brady said.

What’s more, most of these regulatory genes, called transcription factors because they control the transcription (or activity) of other genes, have been identified in stems, shoots and leaves — but not many in roots, where nitrogen actually gets into a plant from the soil.

Science at the root

Brady’s laboratory aims to discover the networks of genes that shape how plant roots live and grow. Because nitrogen is so important to plants, graduate student Allison Gaudinier and Brady took the premise that transcription factors for nitrogen metabolism would also be linked to other important processes.

Gaudinier used robotics to screen transcription factors against hundreds of genes at a time, assembling them into a network. Adjunct Associate Professor Doreen Ware and colleagues at Cold Spring Harbor Laboratory used computational methods to predict which genes were most important in the network. The UC Davis team could then study the role of those genes in plants.

The results establish a core set of genes that are critical in nitrogen metabolism, Brady said. “If we want to breed nitrogen-efficient plants, we need to look at these genes,” she said. “This will open up a lot of research.”

The work was supported by DuPont Pioneer with additional support from the National Science Foundation, the Howard Hughes Medical Institute and University of California fellowships.

Materials provided by University of California – Davis. Original written by Andy Fell. Note: Content may be edited for style and length.