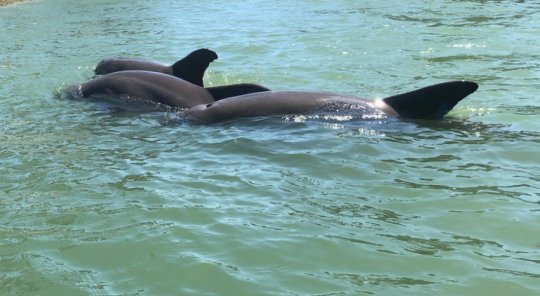 Cooperation is one of the most important abilities for any social species. From hunting, breeding, and child rearing, it has allowed many animals — including humans — to survive and thrive. As we better understand the details on how animals work together, researchers have been focusing on the degree of cooperation and the cognitive abilities required for such activity.

But much of the reporting comes from the observations of terrestrial animals, with comparably little data on aquatic species. One notable example is the dolphin. They are well known to operate in social groups — a group of dolphins is a pod — in a ‘fission-fusion society’, where groups merge and split over time. Previous studies have even suggested that dolphins may understand a partner’s role in cooperative tasks.

However, due to the complex mechanics of conventional experiments it was difficult to determine how this behavior was characterized in dolphins.

Researchers at Kyoto University’s Primate Research Institute, Kindai University, and Kagoshima City Aquarium decided to investigate such behavior by simplifying the previous experimental conditions. Their report was published in the journal PeerJ.

“In our investigation, we wanted to find out how bottlenose dolphins coordinate their cooperative behavior. Our setup was the Hirata’s rope-pulling task: where two dolphins pull on opposite ends of a rope simultaneously to receive rewards.” explains first author Chisato Yamamoto.

The Hirata task, or the cooperative pulling paradigm, has been used to demonstrate that a significant number of animals — including chimpanzees, dogs, and elephants — have cooperative abilities.

And it appears dolphins are just as cooperative. In their test, the researchers first sent out the initiators in the direction of the task, then and after a few seconds a follower was sent. They observed that the initiator waited for their partner to reach the task, and the follower would coordinate their swimming speed to match the initiator’s behavior.

“Having initiators and followers coordinate behavior for a task has previously been observed in chimpanzees and orangutans,” continues Yamamoto. “But dolphins appear to be more flexible in their coordination, capable of changing their actions depending on where their partner is.”

Team leader Masaki Tomonaga explains that this coordination is likely rooted in their patterns of affiliative behavior, a method of social interactions that functions to reinforce social bonds with a group.

“Synchronized swimming in is one of these affiliative behaviors. How social characteristics influence cooperative systems may be one of the important questions that will reveal the evolution of cooperation in mammals.”