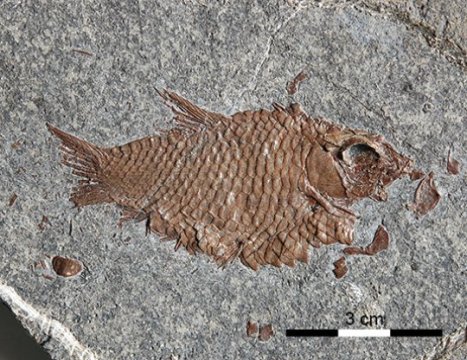 A team led by Ludwig-Maximilians-Universitaet (LMU) in Munich paleontologist Adriana López-Arbarello has identified three hitherto unknown fossil fish species in the Swiss Alps, which provide new insights into the diversification of the genus Eosemionotus.

Monte San Giorgio in the Swiss canton of Ticino is one of the most important known sources of marine fossils from the Middle Triassic Period (around 240 million years ago). The new and exquisitely preserved fossil fish specimens, which Dr. Adriana López-Arbarello (a member of the Institute of Paleontology and Geobiology and of the Geobiocenter at LMU) has been studying in collaboration with colleagues based in Switzerland were also discovered in these dolomites and limestones. As the researchers now report in the online journal Palaeontologia Electronica, the specimens represent three previously unknown species of Eosemionotus, a genus of ray-finned fishes. “The largest episode of mass extinction in the history of the Earth took place about 250 million years ago,” as López-Arbarello explains. “Our finds now provide further evidence that after this catastrophic event, the biosphere recovered relatively fast and went through a period of rapid diversification and the emergence of numerous new species during the Middle Triassic.”

The first member of the genus Eosemionotus was discovered in the vicinity of Berlin in 1906, and was named E. vogeli. Almost a century later, in 2004, a second species was described from Monte San Giorgio as E. ceresiensis. Detailed anatomical studies of new material from this locality, carried out by López-Arbarello, have now enabled the recognition of three further species that can be assigned to same genus — E. diskosomus, E. sceltrichensis and E. minutus. All five species are small in size, but they can be clearly distinguished from each other on the basis of the relative proportions of their bodies, the position of the fins, the morphology of the skull, and the disposition of teeth and scales. “These differences indicate that each species was adapted to different ecological niches,” López-Arbarello concludes.

These findings provide new insights into the evolution of the genus. “Our phylogenetic analyses demonstrate that Eosemionotus is the oldest known member of an extinct family within the Order Semionotiformes. Although the Semionotiformes were a species-rich and highly diversified clade during the Mesozoic Era, the order died out in the Cretaceous. Only a few members of its sister group have survived down to the present day, and this ancient lineage is now represented by a single family, the gars,” says López-Arbarello.