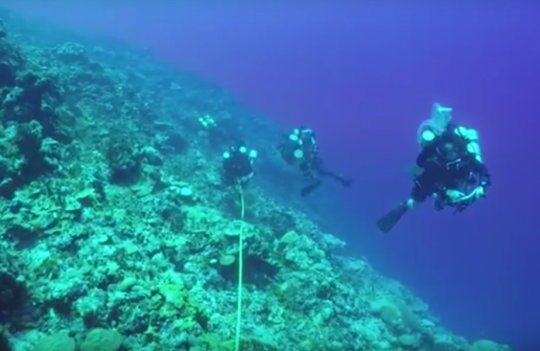 New findings suggest that out-of-sight deep reefs are unique habitats in need of protection. A team of highly trained scientific divers — led by researchers from the California Academy of Sciences — explored Pacific and western Atlantic reefs to test a widely held hypothesis that climate-stressed life from shallow reefs can take refuge at mesophotic depths (100 — 500 feet beneath the ocean’s surface). The results are clear: deep and shallow reefs are actually different systems with their own species, and deep reefs are just as threatened by climate impacts, storms, and pollution as their shallow counterparts. Their work, published today in Science, represents a major shift in thinking for scientists, conservation managers, and members of the public hoping to give coral reefs a fighting chance.

“We have hope for coral reefs around the world,” says Dr. Luiz Rocha, Academy Ichthyology Curator and Hope for Reefs initiative co-leader. “Rather than take that hope away, these findings show us the critical importance of protecting twilight zone reefs in places we don’t normally look. We can’t ignore the deep while we throw our collective might behind protecting and restoring shallow coral reefs. Reefs — in the light and in the dark — need our urgent attention.”

Nearly 75 percent of the world’s coral reefs are currently threatened by the combined impacts of overfishing, habitat destruction, water pollution, and climate change. Though coral reefs provide human societies with vital goods and services worth an estimated several hundred billion dollars per year, very little is known about shallow reefs’ deeper counterparts — the species they shelter, the threats they face, or the refuge they’ve been thought to provide.

Charting life in the deep

Rocha is part of a deep-diving research team that explores these mesophotic reefs, the mysterious coral habitats stretching across a narrow band of ocean 100 — 500 feet beneath the surface. In these deep reefs, animals live in partial darkness — beyond recreational diving limits, yet above the deep trenches patrolled by submarines and ROVs. As part of its Hope for Reefs initiative, the Academy team is exploring this unknown frontier with the help of high-tech equipment like closed-circuit rebreathers that allow scientists to extend their research time underwater. Many species observed in the twilight zone are new scientific discoveries — but determining if and how deep and shallow reefs are connected required a much closer look at reefs around the world.

“Exploring the twilight zone is a scientific adventure we take very seriously,” says Bart Shepherd, Senior Director of the Academy’s Steinhart Aquarium and Hope for Reefs co-leader. “One reason we know so little about them is because it’s hard to complete the dives safely. From the Philippines to the Bahamas, we took careful visual surveys of the life we encountered during these long, amazing, difficult dives. The results are a call to action — deep reefs are not the refuge some thought they were.”

The researchers conducted visual counts of reef species by laying out transects (an easy-to-follow path made from a 20-meter tape measure) and counting which species appear at different depths. By comparing the data from the field with results in peer-reviewed literature, the team presents evidence contradicting the two major assumptions of the “refuge hypothesis”: One, that there is substantial species overlap in deep and shallow reefs (there isn’t), and two, that deep reefs are protected from local and global threats (they’re not).

Twilight zone reefs “feel it all”

Study results published today describe the unique communities — with several endemic species — found in deep reefs. Species that share shallow and deep coral reefs usually have strong preferences for specific depth zones — meaning there are few shallow reef residents comfortable moving between light-filled reefs and shadowy twilight zones. Even top predators — key players in the marine ecosystem, like sharks, groupers, and snappers — that move between shallow and deep reefs each day do most of their feeding in the light and aren’t likely to take refuge in the deep. Shallow and deep reef populations appear disconnected.

“Deep reefs feel it all,” says Rocha, referring to the evidence of mesophotic vulnerability they’ve documented across two oceans. “Besides storm impacts, we saw the familiar signs of heavy fishing, sedimentation, coral bleaching, and invasive species in deep reefs. If real refuges for shallow reefs exist, we think they’re mostly far away from humans. Climate impacts can still reach them, but we’re really seeing the undersea consequences of human population expansion and increased demand for food and natural resources. Reef troubles don’t stop at 100 feet deep.”

A light in the dark

The Academy’s commitment to studying and restoring global coral reefs will continue alongside several visionary partners in years to come. This August, the institution’s twilight zone researchers will explore deep Pacific reefs in the Marshall Islands.

Hope for Reefs — the Academy initiative behind this study — supports expeditions to Earth’s most remote and unknown reefs for deeper study and understanding. Visitors to the Academy in San Francisco’s Golden Gate Park can learn more about these precious ecosystems in Twilight Zone: Deep Reefs Revealed, a first-of-its-kind exhibit that showcases the mysterious underwater realm so few get to witness. Visitors can also experience the museum’s newest original planetarium show Expedition Reef — featuring immersive visualizations of deep reefs and shallow reef restoration work with SECORE International — under a world-class planetarium dome.

“In a time of global crisis for coral reefs, learning more about unexplored reef habitats is critical to our understanding of how to protect them,” says Rocha. “Deep reefs are important environments that are rarely included in marine protected areas or sanctuaries. We aim to highlight the ocean’s vast and unexplored wonders and inspire a new generation of sustainability champions.”