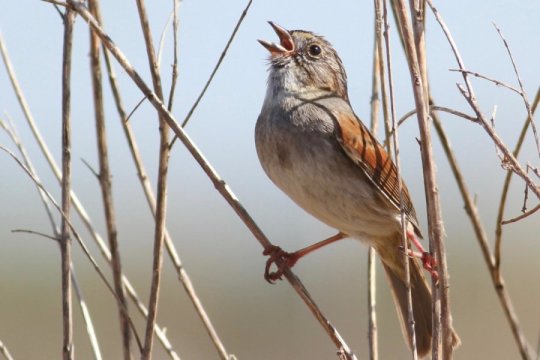 What makes human cultural traditions unique? One common answer is that we are better copycats than other species, which allows us to pass our habits and ways of life down through the generations without losing or forgetting them.

But a new study of birdsong finds that swamp sparrows are good impersonators too. And by faithfully copying the most popular songs, these birds create time-honored song traditions that can be just as long-lasting as human traditions, researchers say.

In fact, swamp sparrow song traditions often last hundreds of years, with some songs going back further than that.

“According to the models, some of the songs could go back as far as the Vikings,” said first author Robert Lachlan, a lecturer in psychology at Queen Mary University of London.

The results appear June 20 in the journal Nature Communications.

The slow trill of the swamp sparrow can be heard in marshes and wetlands across eastern and central North America.

A grey-breasted bird with brownish wings, the swamp sparrow attracts mates and defends his territory with songs built from two- to five-note snippets, repeated over and over.

Researchers observed decades ago that swamp sparrows living in different places sing slightly different songs. Birds in New York might tend to sing in three-note repeats while their counterparts in Minnesota favor four, or combine the same basic notes in a different order.

Young birds learn the local customs in the first weeks of life by imitating their elders.

But while similar cultural traditions — shared behaviors that are learned from others and passed from one generation to the next — have been observed in all sorts of animals, the thinking has been that human traditions are more likely to last.

To test the idea, the researchers recorded the songs of 615 male swamp sparrows in six populations across New York, Pennsylvania, Michigan and Wisconsin.

Using computer software to measure and analyze each song, the team identified 160 song types across the species’ range.

Each male has only a handful of songs in his repertoire. To figure out how young birds choose which songs to learn, the researchers developed a mathematical model that simulates how each new song type spreads within groups over time.

Each run of the model represented 5,000 years, at the end of which the researchers measured the song types in each group of birds.

With their model they also compared various song-learning strategies. For example, young birds might prefer to imitate one particular adult, such as their dad or a male with a good territory. Alternately, they might pick certain songs because they find them inherently more attractive, regardless of who sings them.

When they looked at how well their simulations fit the real data, the researchers found that young birds don’t just randomly pick any song they hear and imitate that.

Instead, they copy the crowd, mimicking the most popular songs more often than one would expect by chance. Unique or rare songs that go against the mainstream rarely get a peep.

What’s more, swamp sparrows learn their songs with amazing fidelity, correctly matching the songs they attempt to imitate more than 98 percent of the time.

There’s an evolutionary benefit to fitting in, the researchers say. Previous studies show that females prefer typical tunes over outliers.

The end result, their models show, is that local song customs in swamp sparrows are far from fleeting trends, quickly going out of fashion and never to be uttered again.

Instead, they are handed down from one swamp sparrow generation to the next, with song types often persisting for 500 years or more, the researchers estimate.

The birds need not keep track of how many birds are singing each song to figure out how to fit in, the analyses show. They memorize a variety of songs early in life, from multiple older birds, but once they reach adulthood they only keep the songs they repeatedly hear others singing.

“The longstanding stable traditions so characteristic of human behavior have often been ascribed to the high cognitive abilities of humans and our ancestors,” said study co-author Stephen Nowicki, professor of biology at Duke. “But what we’re showing is that a relatively simple set of rules that these songbirds are capable of following can achieve equally lasting traditions.”

“We’re not saying that birds have anything akin to human culture,” Lachlan said. “It shows that just those two ingredients — a preference for popular songs, and the ability to copy them — can get you quite a long way to having stable complex culture.”

This research was supported by the Duke University Provost Office, the U.S. National Science Foundation (IOS-1144991) and the Bill & Melinda Gates Foundation (OPP1084362).