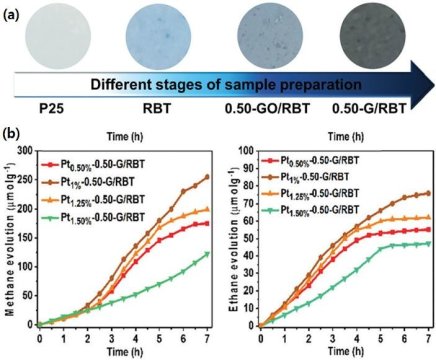 A research team led by Professor Su-Il In from Department of Energy Science and Engineering had succeeded in developing photo catalysts that can convert carbon dioxide into usable energy such as methane or ethane.

As carbon dioxide emissions increase, the Earth’s temperature rises and interest in reducing carbon dioxide, the main culprit of global warming, has been increasing. In addition, the shift to reusable fuel for existing resources due to energy depletion is also drawing attention. In order to solve trans-national environmental problems, research on photocatalysts, which are essential in converting carbon dioxide and water into hydrocarbon fuels, is gaining attention.

Professor In’s research team developed a high-efficiency photocatalyst that can convert carbon dioxide into methane (CH4) or ethane (C2H6) by placing graphene on reduced titanium dioxide in a stable and efficient way.

The photocatalyst developed by the research team can selectively convert carbon dioxide from a gas to methane or ethane. The results showed that its generation volume is 259umol/g and 77umol/g of methane and ethane respectively and its conversion rate is 5.2% and 2.7% higher than conventional reduced titanium dioxide photocatalysts. In terms of ethane generation volume, this result shows the world’s highest efficiency under similar experimental conditions.

In addition, the research team proved for the first time that the pore moves toward graphene due to band bending phenomena visible from titanium dioxide and graphene interfaces through the international joint research conducted with the research team led by James R. Durrant at the Department of Chemistry of Imperial College London (ICL), UK using photoelectron spectroscopy.

The catalyst material developed by the research team is expected to be applied to a variety of areas such as high-value-added material production in the future and be used to solve global warming problems and energy resource depletion issues by selectively producing higher levels of hydrocarbon materials using sunlight.

Professor In said, “The reduced titanium dioxide photocatalyst with graphene that has been developed this time has the advantage of being able to selectively produce CO2 as a usable chemical element such as methane or ethane. By conducting follow-up research that increases the conversation rate so that it can be commercialized, we will contribute to the development of technology for reducing carbon dioxide and turning it into a resource.”