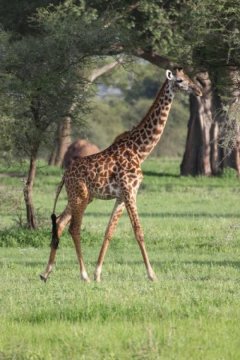 Putting land management in the hands of local communities helps the wildlife within, according to new research by a Penn State scientist. A new study demonstrates the positive ecological impacts of a community-based wildlife conservation area in Tanzania. The research is summarized in a paper that appears online [date] in the Journal of Wildlife Management.

“Community-based natural resource management has become one of the dominant paradigms of natural resource conservation worldwide,” said Derek E. Lee, the author of the paper, associate research professor at Penn State, and principal scientist at the Wild Nature Institute.

“This type of strategy transfers the resource management and user rights from central government agencies to local communities. The impact of these projects on wildlife is rarely rigorously assessed, so we compared wildlife densities inside and outside the community conservation area. My data demonstrate that one of the first areas of this type in Tanzania has had positive ecological outcomes in the form of higher wildlife densities and higher giraffe population growth,” said Lee.

In Tanzania, efforts to decentralize wildlife management to local communities occur through the creation of Wildlife Management Areas, whereby several villages set aside land for wildlife conservation in return for a share of tourism revenues from these areas. Nineteen Wildlife Management Areas are currently operating, encompassing 7% (6.2 million hectares) of Tanzania’s land area, with 19 more planned. Tourism in Tanzania generates around $6 billion US dollars annually, which represents about 13% of their total gross domestic product, so there is good incentive for villages to participate in these management areas.

“For six years, I studied the Burunge Wildlife Management Area in Tanzania, which was formally established in 2006 and added increased wildlife protections in 2015,” said Lee. He observed higher numbers of wildlife inside the protected area compared to the village lands just outside the area as well as lower densities of livestock, including cattle, sheep, and goats. He also observed higher numbers of wild ungulates — hooved mammals — and lower numbers of livestock in the management area after the increased wildlife protections began.

“This suggests that the specific management activities implemented in 2015 have a positive effect on wildlife within the Burunge Wildlife Management Area,” said Lee. “These include performing anti-poaching activities to protect wildlife, reducing wood cutting, preventing livestock encroachment, and providing training and equipment to village rangers so that they can perform these activities.”

The change to management activities also improved survival and population growth of giraffes within the management area. Lee did not observe any change in giraffe demographics outside of the management area in the adjacent Tarangire National Park over the same time period.

“It is very gratifying to see the positive role of community conservation areas in saving Africa’s endangered and declining species,” said Philp Muruthi, Senior Director of Conservation Science for the African Wildlife Foundation who was not involved in the study. “Clearly to save the giraffe will take more than the formal national parks. And the benefits to the species and landowners are immense into the future.”

This study highlights the usefulness of monitoring wildlife to evaluate specific management strategies as well as the general concept of community-based natural resource management. In particular, locally based monitoring schemes could lead to more sustainable community-based conservation.

“We know from this and previous studies that these management areas can have positive effects on wildlife,” said Lee. “But there have been some social and economic critiques of wildlife management areas. For example, there is a higher incidence of poverty around protected areas compared to other rural areas. Although it can be challenging for community-based natural resource management to achieve both conservation and human development goals, the concept appears to be the best opportunity for Tanzania to retain its place as one of the most famous and profitable wildlife tourism destinations while also sustainably developing local communities.”