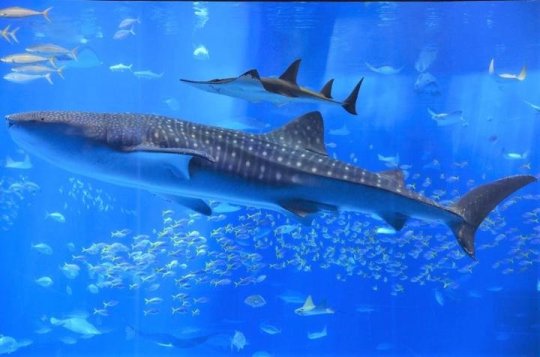 Whale sharks, the world’s largest fish, likely endure periods of starvation and may eat more plants than previously thought, according to the first results of a new health check developed at the University of Tokyo. Ocean scientists now have a powerful, simple tool to discover the diets, migrations, and conservation needs of this endangered species.

Whale sharks are filter-feeding, soft-bodied fish that travel tropical oceans in search of their microscopic food. They grow 12 meters (39 feet) long and weigh 21 metric tons (46,297 pounds), about as long as a public city bus and as heavy as three African elephants. Despite their conspicuous size, many details of whale sharks’ lives in the open ocean remain a mystery, even 183 years after they were first discovered.

“Whale sharks are one of the most exciting organisms to encounter for tourists and scientists alike, not just due to their sheer size, but also their grace and beauty. It is a privilege to unveil some of the mystery surrounding their lives,” said Wyatt.

Traditionally, researchers track whale shark feeding by taking samples of different body tissues and analyzing the different forms, or isotopes, of carbon and nitrogen inside the tissues. Researchers realized that they could interpret tissue isotope levels correctly only if they knew each whale shark’s history of growth and diet.

Tracking the growth and diet of wild whale sharks over time is impractical, so Wyatt used a blood test to complement tissue isotope analyses. Researchers take about 10 milliliters (2 teaspoons) of blood from one of the whale shark’s pectoral fins. Scientists can analyze blood samples immediately on board a research ship, but tissue isotope analysis requires specialized laboratory equipment.

“Similar to blood tests performed when you visit the doctor, we are able to assess the health of whale sharks based on the contents of their blood,” said Wyatt. “We combine blood tests and tissue isotope analyses to create an accurate health check for the animals.”

The complete health check was given to eight wild whale sharks off the coast of Okinawa, Japan. Researchers collected samples while freeing whale sharks from accidental entanglement in fishing nets.

Several of the wild whale sharks may have not eaten for weeks or months, according to blood test results.

“Maybe they didn’t encounter any food, or maybe they just do not eat while migrating long distances,” said Wyatt.

Groups of whale sharks at coastal sites have been seen eating a range of prey, from tiny krill and fish eggs up to small fish and squid. A new finding of the health check is that all sharks tested showed signs of eating significant amounts of plants and algae.

“This is a somewhat surprising and controversial finding, since whale sharks are generally assumed to feed strictly on higher levels of the food chain. However, some whale sharks have been found with seaweed in their stomachs and eating plants might make sense if feeding opportunities can become as limited as our blood tests suggest,” said Wyatt.

The health check and diet discoveries from wild Okinawan whale sharks may not be the same for other species, or possibly even other whale shark populations. However, Wyatt hopes that the complete health check approach will be used to investigate the possibility of starvation, individual foraging specialization, and unexpected food choices in a wide variety of other threatened marine animals.

Note: Whale sharks (Rhincodon typus) are listed as endangered on the International Union for Conservation of Nature Red List of Threatened Species.