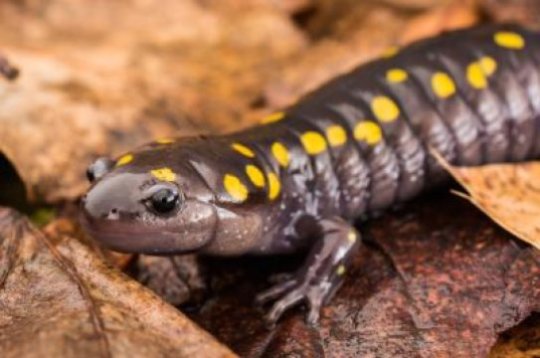 Insect repellents containing picaridin can be lethal to salamanders. So reports a new study published today in Biology Letters that investigated how exposure to two common insect repellents influenced the survival of aquatic salamander and mosquito larvae.

Insect repellents are a defense against mosquito bites and mosquito-borne diseases like dengue, chikungunya, Zika, and West Nile virus. Salamanders provide natural mosquito control. During their aquatic juvenile phase, they forage on mosquito larvae, keeping populations of these nuisance insects in check.

Emma Rosi, a freshwater ecologist at Cary Institute of Ecosystem Studies and a co-author on the paper explains, “Use of insect repellents is on the rise globally. Chemicals in repellents enter aquatic ecosystems through sewage effluent and are now common in surface waters. We set out to understand the impact of repellent pollution on both larval mosquitoes and the larval salamanders that prey on them.”

The paper is the first to suggest that environmentally realistic concentrations of picaridin-containing repellents in surface waters may increase the abundance of adult mosquitoes due to a decrease in predation pressure on mosquitoes at the larval stages.

Testing the two most popular repellents

The research team tested the effects of two of the most widely used insect repellents — DEET (Repel 100 Insect Repellent) and picaridin (Sawyer Premium Insect Repellent) — on larval salamanders and mosquitoes. In a lab, they exposed mosquito larvae and just-hatched spotted salamander larvae to three environmentally relevant concentrations of these chemicals, as well as a control treatment.

Rosi notes, “The concentrations in our experiments are conservative; we prepared them based on unadulterated commercial formulations, not concentrations of pure active compounds.”

Mosquito larvae were not impacted by any of the treatments and matured unhindered. After four days of exposure to repellent with picaridin, salamanders in all of the treatment groups began to display signs of impaired development such as tail deformities. By day 25, 45-65% of picaridin-exposed salamander larvae died.

Adding, “The expediency of salamander mortality was disconcerting. When studying the effects of a chemical on an amphibian, we usually look for a suite of abnormalities. We couldn’t collect these data because the salamanders died so quickly.”

How toxic is toxic?

LC50 tests are used to define a chemical’s environmental toxicity. These standard tests, based on one life stage of a single species, measure how long it takes for 50% of a test population to die with increasing exposure to a chemical in a lab over a four-day period.

Co-author Alexander Reisinger, an Assistant Professor at University of Florida, Gainesville says, “We observed heavy salamander mortality with picaridin, but not until after the fourth day of exposure. By the LC50 measure, picaridin would be deemed ‘safe’, but clearly, this is not the case. If a substance doesn’t kill organisms within the first few days of exposure, it can still be toxic and have ecological impacts.”

Results may underestimate the problem

Lethal in a controlled setting, picaridin may cause greater mortality in a natural context, where organisms are exposed to numerous stressors. Rosi notes, “Animals don’t exist in isolation. In nature, competition, predation, resource limitation, and social interactions make it difficult for an organism to tolerate the added stress of exposure to a harmful substance, even in small amounts.”

Timing — of both repellent use and amphibian reproduction — is also key. Many amphibians breed in a single seasonal pulse, putting all their eggs in one basket, so to speak. Mosquitoes have an extended breeding season, and reproduce multiple times.

Lead author Rafael Almeida, a postdoctoral researcher at Cornell University, conducted the research as a visiting PhD student at the Cary Institute. He explains, “The amount of repellents entering waterways peaks seasonally. If amphibians are exposed during a sensitive life stage, entire cohorts could perish. The population would not have a chance to recover until the following year. Meanwhile, mosquitoes would continue to reproduce. It suggests a negative feedback loop.”

Future work is needed to explore the relationship among mosquito repellents, amphibians, and other ecological factors, and to better assess the severity of repellents’ impact in the wild.

Almeida concludes, “The effects of repellents containing DEET and picaridin need to be studied further to determine the extent to which these chemicals disrupt aquatic ecosystems and potentially increase mosquito-borne disease risk worldwide.”