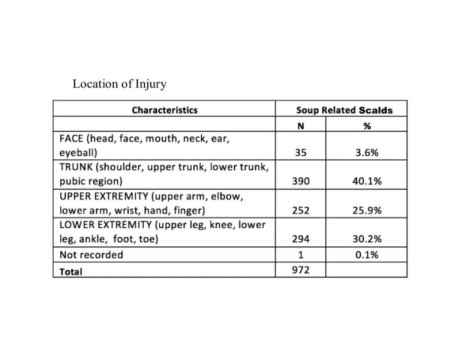 Microwavable instant soup products cause at least two out of every 10 scald burns that send children to emergency departments each year, according to new research being presented at the American Academy of Pediatrics (AAP) 2018 National Conference & Exhibition.

An abstract of the study, “Instant Soup Scald Injuries in Children,” will be presented on Monday, Nov. 5, at the Orange County Convention Center in Orlando, Fla.

“Scald burns are a major cause of preventable injury among children, and our research found that instant soup spills are responsible for a large number of these painful burns,” said Courtney Allen DO, FAAP, a Pediatric Emergency Medicine Fellow at Emory University.

The researchers examined National Electronic Injury Surveillance System data from 2006 to 2016 to identify pediatric patients whose scald burns were caused by either microwavable instant soup, instant noodles, cup of soup, or water for making instant soup. They determined scald burns related to instant soups and noodles affect more than 9,500 children annually between ages 4 and 12 years.

The peak age for instant soup spill injuries, Dr. Allen and her colleagues determined, was 7 years old. They also found that the most commonly burned area of the body was a child’s torso, comprising 40 percent of the injuries. Roughly 57 percent of the children burned were female.

“Instant soups and noodles in prepackaged cups and bowls may seem simple to prepare just by adding water and microwaving them,” Dr. Allen said. “But once they’re heated up they become a dangerous burn risk. Caregivers need to closely supervise younger children who might otherwise get hurt if cooking for themselves.”

In addition, Dr. Allen said, the food product industry may consider structural changes to packaging to prevent injuries as well — making them more difficult to tip over, for example.

Materials provided by American Academy of Pediatrics. Note: Content may be edited for style and length.