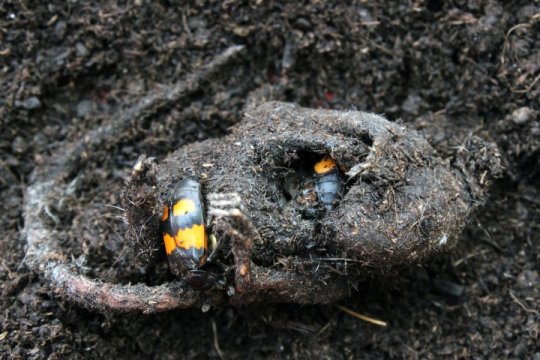 The burying beetle Nicrophorus vespilloides buries the cadavers of small animals in soil to use them as a food source for its offspring. However, the carcass and thus the breeding site are highly susceptible to microbial decomposition and putrefaction resulting in the production of toxic substances, the growth of microbial pathogens and nutrient loss. In a new study, researchers from the Max-Planck-Institute for Chemical Ecology, the University of Mainz and the University of Giessen, Germany, show that Nicrophorus vespilloides beetles are able to replace harmful microorganisms with their own beneficial gut symbionts, thus turning a carcass into a nursery with a microbial community that even promotes larval growth (Proceedings of the National Academy of Sciences).

Burying beetles exploit nutrient-rich, but challenging resources for breeding: Their larvae feed on the cadavers of small animals. If untended by these beetles, carcasses are usually taken over by microbial decomposers. Decomposition of carrion under natural conditions is associated with growth of microbial pathogens and competitors, accumulation of toxic metabolites and rapid nutrient loss.

A team of scientists has now found out that the burying beetle Nicrophorus vespilloides preserves the food source for its offspring by inoculating it with beneficial microbes from its own gut. The researchers genetically characterized the bacterial and fungal communities of tended and untended carcasses and compared microbial metabolic activity. They also quantified putrescine and cadaverine, the foul-smelling organic compounds associated with carrion putrefaction, and amino acids. “Utilization of carcasses did not involve suppression of microbes, but the replacement of the native microbial community with the beetles’ gut microbes. For example, tended carcasses showed suppression of a soil-associated mold but the growth of a beetle-associated yeast. This shift in microbial communities resulted in biochemical changes in beetle-tended carcasses,” explains first author Shantanu Shukla from the Max Planck Institute for Chemical Ecology.

The importance of the symbionts for larval development

The researchers then wanted to know if these changes were beneficial to the insects that invest so heavily in defending and preparing carcasses. Therefore they tested the effect of the carrion microbiota on host fitness by measuring larval performance with and without the microbial symbionts present on the carrion. The negative effects on larval growth were considerable: Larvae fed on carcasses from which the matrix had been removed were significantly smaller although they had consumed the same amount of carcass tissue.

“Our study shows how insects can modify their habitats by culturing their symbionts both in their guts as well as outside on a breeding resource to increase fitness. The burying beetle is a fascinating example of symbiont-enabled exploitation of challenging resources,” senior author Heiko Vogel summarizes.

The potential of the identified yeasts

The identified yeasts will now be studied in more detail, especially their role in detoxifying putrefaction products and (pre)digesting carrion to benefit the beetle larvae. “Since the microbiome transmitted by the beetles suppressed the growth of potentially harmful and toxin-producing bacteria and fungi, it is worthwhile to explore potential antimicrobials more closely, because they could also become relevant for medical applications,” says Andreas Vilcinskas, who is leading the antibiotic research at the participating Fraunhofer Institute for Molecular Biology and Applied Ecology.