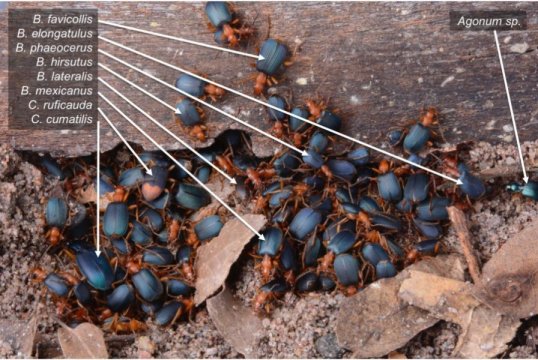 A group of ground beetles known as bombardier beetles are famous for shooting a boiling-hot, noxious liquid at would-be attackers, but despite their formidable defense, they prefer not to shelter alone, according to a study publishing October 31 in the open-access journal PLOS ONE by Jason Schaller and colleagues from the University of Arizona in Tucson, USA.

Bombardier beetles in the genus Brachinus are nocturnal predators that shelter during the day in dark, moist crevices on the banks of rivers, but their tendency to form large groups containing many similar species has puzzled scientists because they would be expected to compete over food and territory. To investigate, the researchers sequenced DNA from all bombardier beetles in 59 sheltering groups collected in the Sonoran Desert Region in Arizona, conducting the first ever phylogenetic analysis for such a multi-species grouping.

They found that groups included up to eight bombardier species — 71% of groups contained at least two species and 21% provided a home to three or more species. The beetles tended to group with distantly related species on the Brachinus tree, which mate at different times of year — a strategy that may help the beetles avoid accidental hybridization, the authors suggest. The team also video-recorded beetles in the lab as they chose from a selection of artificial shelters and found that individuals preferred to join existing groups rather than shelter alone, but most showed no preference for exactly which species they sheltered with.

Bombardier beetles probably benefit from safety in numbers by sheltering with other beetles that share their lethal chemical defense strategy. It takes around 24 hours to recharge their noxious chemicals after use, but resting with other bombardiers may help ensure that more ammunition is available instantly to fend off persistent predators.

Moore adds: “To me, the most important aspect of this study is that it combines fieldwork, natural history observations, behavioral ecology, and molecular phylogenetics to drill down on a question.”