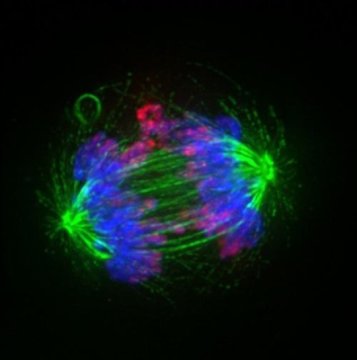 A new way of identifying potential cancer drugs could streamline the development of therapies, following a discovery by scientists.

Researchers have devised a way to screen potential drug compounds to select those that interfere with tumour cells in two ways.

Their study seeks to build on an existing approach of identifying drugs that target an essential protein in cancer cells, known as telomerase.

Scientists hope to identify drugs that not only inhibit this protein but also induce errors when cancer cells divide packages of their DNA — known as chromosomes — to form new cells.

An attack on two fronts could prevent cancerous cells from growing, and therefore kill tumours.

Researchers at the University of Edinburgh, the Institute Curie in Paris, the National Cancer Institute of the US and the Kazusa DNA Institute of Japan tested drug compounds using artificial human chromosomes with in-built fluorescent markers.

This allowed the team to easily detect when and how often drug treatment caused the loss of chromosomes.

Drugs identified in this way were then tested in different types of cancer cells, to investigate exactly how they were able to disrupt chromosome division at a high rate.

The study, published in Cancer Research, was supported by Wellcome, the US National Institutes of Health, and the Government of Japan.

Professor William C Earnshaw, of the University of Edinburgh’s School of Biological Sciences, who participated in the study, said: “Our approach enables the selection of drug compounds that disrupt normal division of cancer cells. Our hope is that this can result in the development of more effective therapies to target tumours.”

Dr Mar Carmena, of the University of Edinburgh’s School of Biological Sciences, who also took part in the study, said: “We hope our two-pronged approach can prove useful in targeting a range of cancers using newly selected, more efficient drugs.”