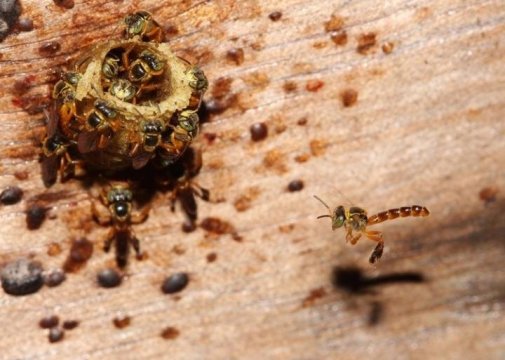 The Brazilian stingless bee Tetragonisca angustula (jataí in Portuguese) deploys a different strategy for defending its nests from other social insect species. In addition to posting sentinels at the nest entrance, as do most social insects, colonies of this species also have guards that hover near the entrance all the time.

A study by researchers in the Department of Entomology and Acarology of the University of São Paulo’s Luiz de Queiroz College of Agriculture (ESALQ-USP) in Brazil and the University of Sussex in the United Kingdom found that hovering guardian bees position themselves near the nest entrance in a nonrandom manner.

They tend to hover in even numbers on both sides of the entrance. This distribution enables them to detect and intercept intruders more rapidly before they reach the nest and begin an attack. This strategy improves nest vigilance, according to the researchers.

The study resulted from a project supported by São Paulo Research Foundation — FAPESP and was published in the journal Behavioral Ecology.

“We observed that the guards of this stingless bee species coordinate their nest vigilance strategy against robber bees and possible predators,” said Denise de Araujo Alves, a postdoctoral researcher at ESALQ-USP and one of the authors of the study.

The researchers filmed and analyzed the behavior of 15 colonies of T. angustula stingless bees (Meliponini). The species is considered only mildly aggressive compared to most stingless bees, but its guards are especially defensive toward the obligate robber bee Lestrimelitta limao, its main natural enemy and a potential destroyer of its nests.

The researchers counted the hovering guards at the nest entrance, recording the number of groups to the left and right of the entrance for group sizes of two, three and four guards. For each guard number (two, three or four), the frequency with which guards were distributed in all possible arrangements, left versus right, was then compared with the expected random distribution.

The results of the analysis showed that hovering guards were significantly more likely to be distributed evenly on both sides of the entrance than randomly.

Using the video recordings, the researchers also quantified body rotation as a measure of individual vigilance. Their measurements of the hovering guards’ body angles showed that coordinated vigilance was enhanced by having guards in even numbers on both sides of the nest entrance because the visual range of each additional guard on the same side overlapped with that of the others, and even-numbered groups had a significantly wider collective visual range than non-even groups.

“The benefits of coordinated vigilance in relation to group size are unknown so far. Although we studied groups of one to four hovering guards, the number can reach 15. We predict that the importance of coordinated vigilance decreases as group size increases. One of the reasons may be that random positioning of many guards probably covers all directions, approximating 360°,” Alves said.

To investigate the capacity of hovering guards to detect and intercept an intruder on its way to the nest entrance, the FAPESP-funded study performed experiments simulating an attack by a robber bee on a stingless bee nest with one guard or two guards.

The attacks were simulated using a dummy bee made of black modeling clay treated with citral, a major component of L. limao’s mandibular glands and a chemical known to elicit defensive responses in T. angustula.

The dummy was suspended from a wooden pole on a thread, perpendicularly to the colony entrance and directly in front of or behind the hovering guards. It was then moved toward the entrance from an initial distance of 20 cm at a constant rate of 1 cm per second.

Single hovering guards presented with the dummy intruder were found to be three times more likely to detect and attack it before it reached the entrance when it approached from the front than from behind the guard. When the dummy was presented to two guards, one on either side of the entrance, it was twice as likely to be attacked by the guard facing it compared to the guard facing away.

“Because the hovering guards are positioned to the left and right of the entrance, their angle of vision differs from that of the fixed sentinels standing at the entrance. If a predator or kleptoparasitic bee like L. limao approaches from the side rather than directly in front of the entrance, they can detect and intercept it much faster,” Alves explained.

The results of the study, in her view, provide a better understanding of how social insects coordinate vigilance against predators and kleptoparasites.

Most prior research on the level of vigilance against predators in social insects focused on the effects of group size, assuming that the level of vigilance would diminish as group size increased, since each member of the group would devote less time to vigilance. Less attention was paid to how guards and sentinels are positioned in relation to each other and how this affects collective vigilance.

“Relatively little research has been done to find out whether the level of collective vigilance increases if the group coordinates its vigilance efforts, by monitoring different directions, for example, as we found in this study of stingless bees,” said the FAPESP-supported researcher.

Vigilance in social insects, she added, differs from vigilance in most gregarious vertebrates. Unlike groups of fish, birds or mammals, which can flee predators, social insects must protect their nests, which are typically in a fixed location and contain reproductive individuals, offspring and food stores.

Moreover, early detection of predators is important for social insects because the first predators to arrive are often scouts from colonies of other social insects, and these individuals can recruit nestmates for a mass attack.

“Whereas individuals in a herd, flock or shoal may not be kin, guards in groups of social insects must always be vigilant because their survival depends more on survival of the colony than on their own personal safety. Altruism therefore probably ‘facilitated’ the evolution of coordinated vigilance in the case of social insects, particularly as the nest contains their genetic heritage — mothers and siblings — as well as stores of food,” Alves said.