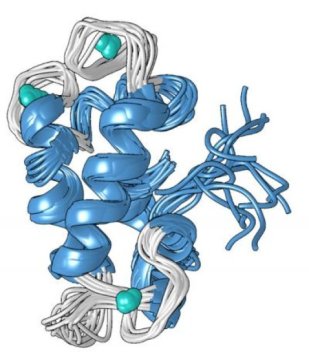 A newly discovered protein could help detect, target, and collect from the environment the rare-earth metals used in smartphones. Two new studies by researchers at Penn State describe the protein, which is 100 million times better at binding to lanthanides — the rare-earth metals used in smartphones and other technologies — than to other metals like calcium. The first study, which appears in the Journal of the American Chemical Society, describes the protein, and the second paper, which appears online in the journal Biochemistry, describes its unique structure, which likely plays a role in its remarkable selectivity for lanthanides.

“Recently, there has been a lot of interest in increasing accessibility of rare-earth elements like lanthanides, which are used in the screens and electronics of smartphones, batteries of hybrid cars, lasers, and other technologies,” said Joseph Cotruvo Jr., assistant professor and Louis Martarano Career Development Professor of Chemistry at Penn State and an author of both studies. “Because the physical properties of rare-earth elements are so similar, it can be difficult to target and collect one in particular. Understanding how this protein binds lanthanides with such incredibly high selectivity could reveal ways to detect and target these important metals.”

The research team discovered the protein, which they named lanmodulin, within the bacterium Methylobacterium extorquens, which grows on plant leaves and in soil and plays an important role in how carbon moves through the environment. The bacteria require lanthanides for the proper function of some of their enzymes, including one that helps the bacteria to process carbon, which is required for its growth.

“These bacteria need lanthanides and other metals like calcium to grow,” said Cotruvo. “They need a way to obtain each metal from the environment and make sure that each goes to the right place within the cell. It appears that these bacteria have developed a unique way to target lanthanides in the environment, where they are much less abundant than other metals like calcium.”

The protein’s unique structure, which Cotruvo determined in collaboration with the lab of Scott Showalter, associate professor of chemistry at Penn State, may explain why it is 100 million times better at binding lanthanides over calcium. In the absence of metal, Cotruvo explained, the protein is mostly unstructured, but when metal is present, it changes conformation into a compact, well-defined structure.

The new compact form contains four structures called “EF hands.” Human cells contain many proteins with EF hands, which are involved in using calcium for functions like neurons firing and muscles contracting. These proteins also bind lanthanides, though lanthanides are not physiologically relevant in humans and the proteins are only 10 or 100 times more likely to bind lanthanides than they are to bind calcium. The compact structure of the lanmodulin protein also contains an amino acid called proline in a unique position in each of the EF hands, which may contribute to the protein’s lanthanide selectivity.

“The mechanism of lanmodulin’s selectivity for lanthanides is not yet clear, but we think it comes down to the structural change that occurs in the presence of metals,” said Cotruvo. “This structural change is important for the protein’s function; for example, some protein-protein interactions might happen only when the protein is in its compact form. A very small amount of lanthanides is required to induce the conformational change, but it would take much more calcium, more than the bacteria may have, to actually induce the change. This would help to ensure selectivity for lanthanides inside cells.”

Understanding how the protein is so selective may provide insights for the collection of lanthanides for industrial purposes, including extraction from mining waste streams.

“Processing these streams to separate out the rare-earth elements from other metals in an economical way is challenging,” said Cotruvo, “both because of the low abundance of the rare earths and their insolubility, requiring large amounts of acid to keep them in solution. Lowering the pH typically lowers affinity toward metals, but we think this protein starts off with such high affinity that it might help overcome these challenges. We are currently investigating this possibility.”

“We are also very interested in the biological function of the protein,” said Cotruvo. “But ultimately we hope that understanding the protein will lead to more environmentally friendly ways to acquire rare-earth metals from the environment.”