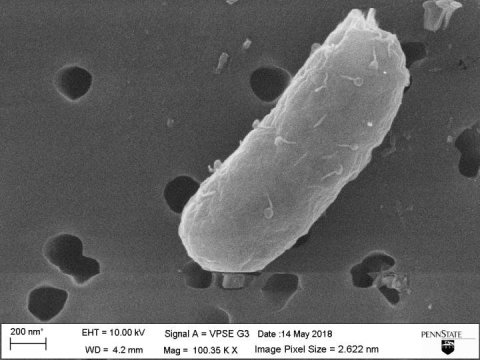 Bacterial cells that normally colonize our guts can distinguish themselves from other bacterial species using what’s traditionally considered their enemy — a virus. Researchers report April 16 in the journal Cell Reports that some bacteria use viruses that have infected them (i.e., phages) for self-recognition and thereby show greater fitness, repelling competitors that lack this adaptation.

“This is the first evidence that cells can distinguish themselves from related competitors through the use of a virus,” says Thomas Wood of Pennsylvania State University, one of the co-senior authors on the study. “The implications are that we should re-evaluate the relationship between a virus and its cellular host in that there are sometimes benefits to having a viral infection.”

The idea for the study began when Wood and his team noticed a demarcation line that formed between different Escherichia coli K-12 strains, but not between identical clones, as they swam toward each other. To investigate the underlying mechanisms, Wood, first author Sooyeon Song of Pennsylvania State University, and co-senior study author Xiaoxue Wang of the Chinese Academy of Sciences screened the swimming behavior of the complete E. coli K-12 library of 4,296 single-gene knockouts.

READ  Research: New pill can deliver insulin through the stomach --

They discovered that the demarcation line completely disappeared for only one mutation affecting a gene that is required for the replication of some phages. The findings suggested that phage-related proteins are responsible for bacterial self-recognition.

Consistent with this idea, the researchers found that the demarcation line was also eliminated for an E. coli K-12 strain lacking all nine cryptic prophages — bacteriophage genomes that have integrated into bacterial chromosomes but do not form active phage particles or rupture (“lyse”) their host cells. In particular, additional experiments revealed that the cryptic prophage CPS-53 and one of its proteins, YfdM, were required for the demarcation line.

Since CPS-53 is essentially inactive in terms of cell lysis and phage-particle production, the researchers suspected that the demarcation line is formed through cell lysis caused by a different, active phage. They found that exposing bacterial cells containing an active lytic phage called SW1 to YfdM stimulated the production of phage particles and caused the lysis of cells, primarily those lacking SW1. Greater concentrations of YfdM or phage particles produced thicker demarcation lines between bacterial cells. The findings suggest that SW1 controls the formation of the demarcation line by using one of the host’s cryptic prophage proteins, YfdM of CPS-53, to propagate.

“E. coli utilizes the tools of its old enemy, which got stuck in its chromosome, to work with this new virus SW1, which stays primarily on the outside of the cell, basically surfing on the cell,” Wood says. “So the bacterial cell is both using a new virus, SW1, against its competitors and using a protein from a virus that attacked millions of years ago.”

This strategy clearly benefitted the host cells, which repelled other strains that lacked SW1 and showed a growth advantage when challenged with phage particles from other strains. “A new virus, SW1, and an old virus protein, YfdM, are used as tools by the cell as it searches for food — and all bacteria are usually starving,” Wood says. “The basic idea is that the cell that carries virus SW1 is not killed as much as the one that has not seen virus SW1 before. So the cell that carries virus SW1 is more fit than the cell that lacks the virus.”

READ  Research: An alternate theory for what causes Alzheimer's disease --

This newly discovered mechanism of self-recognition allows bacteria to form social groups, cooperating with kin while antagonizing non-kin during behaviors that may be important for nourishment, virulence, protection, quorum sensing, and biofilm formation. “Bacteria are frequently thought of as living individually, but in fact they can forage for food as groups,” Wood says. “In order to act as a group, they must be able to distinguish themselves from other bacteria. In one type of social activity, when they communicate, bacterial cells secrete chemical signals to communicate. Now we show cells utilize viruses to distinguish themselves from closely related bacteria.”

In future studies, the researchers plan to investigate how SW1 avoids attacking its host cells, instead killing primarily bacteria that lack the virus. Ultimately, understanding how cells compete could be useful for synthetic biology applications that mimic nature and use bacteria in groups. “In addition, if we understand better how viruses choose which cells to attack, we can perhaps be in a better position to use viruses to combat bacterial infections.”