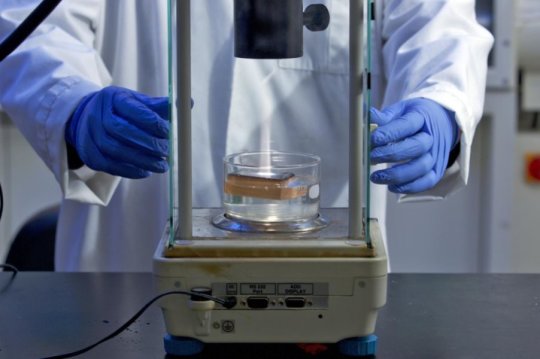 About a billion people around the world lack access to safe drinking water. Desalinating salty water into drinkable water can help to fill this dangerous gap. But traditional desalination systems are far too expensive to install and operate in many locations, especially in low-income countries and remote areas.

Now researchers at the University of Maryland’s A. James Clark School of Engineering have demonstrated a successful prototype of one critical component for affordable small-scale desalination: an inexpensive solar evaporator, made of wood. The evaporator generates steam with high efficiency and minimal need for maintenance, says Liangbing Hu, associate professor of materials science and engineering and affiliate of the Maryland Energy Innovation Institute.

The design employs a technique known as interfacial evaporation, “which shows great potential in response to global water scarcity because of its high solar-to-vapor efficiency, low environmental impact, and portable device design with low cost,” Hu says. “These features make it suitable for off-grid water generation and purification, especially for low-income countries.”

Interfacial evaporators are made of thin materials that float on saline water. Absorbing solar heat on top, the evaporators continuously pull up the saline water from below and convert it to steam on their top surface, leaving behind the salt, explains Hu, who is senior author on a paper describing the work in Advanced Materials.

However, over time salt can build up on this evaporative surface, gradually degrading performance until it is removed, he says.

Hu and his colleagues minimized the need for this maintenance with a device made out of basswood that exploits the wood’s natural structure of the micron-wide channels that carry water and nutrients up the tree.

The researchers supplement these natural channels by drilling a second array of millimeter-wide channels through a thin cross-section of the wood, says Yudi Kuang, a visiting scholar and lead author on the paper. The investigators then briefly expose the top surface to high heat, which carbonizes the surface for greater solar absorption.

In operation, as the device absorbs solar energy, it draws up salty water through the wood’s natural micron-wide channels. Salt is spontaneously exchanged from these tiny channels through natural openings along their sides to the vastly wider drilled channels, and then easily dissolves back into the water below.

“In the lab, we have successfully demonstrated excellent anti-fouling in a wide range of salt concentrations, with stable steam generation with about 75% efficiency,” says Kuang.

“Using natural wood as the only starting material, the salt-rejecting solar evaporator is expected to be low-cost,” adds research associate Chaoji Chen. The evaporator approach also is effective in other types of wood with similar natural channels. The researchers now are optimizing their system for higher efficiency, lower capital cost, and integration with a steam condenser to complete the desalination cycle.

“Wood is an intriguing material scaffold, with its unique hierarchically porous structure, and it is a renewable, abundant and cost-effective resource,” Hu says. “In our lab, the fundamental understanding of biomaterials (especially wood) leads us to achieve extraordinary performance that is competitive with widely used but non-sustainable materials.”

Among other projects, his lab has created light and effective “nanowood” insulating materials. It also has engineered “super wood” that is 12 times stronger and 10 times tougher than natural wood, and potentially may replace steel, titanium or carbon fiber in certain applications, he says.