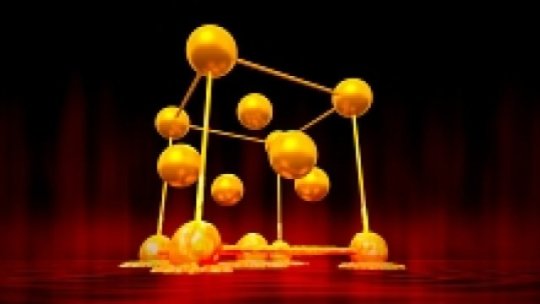 Researchers at the Department of Energy’s SLAC National Accelerator Laboratory have recorded the most detailed atomic movie of gold melting after being blasted by laser light. The insights they gained into how metals liquefy have potential to aid the development of fusion power reactors, steel processing plants, spacecraft and other applications where materials have to withstand extreme conditions for long periods of time.

Nuclear fusion is the process that powers stars like the sun. Scientists want to copy this process on Earth as a relatively clean and safe way of generating virtually unlimited amounts of energy. But to build a fusion reactor, they need materials that can survive being exposed to temperatures of a few hundred millions of degrees Fahrenheit and intense radiation produced in the fusion reaction.

“Our study is an important step toward better predictions of the effects extreme conditions have on reactor materials, including heavy metals such as gold,” said SLAC postdoctoral researcher Mianzhen Mo, one of the lead authors of a study published today in Science. “The atomic-level description of the melting process will help us make better models of the short- and long-term damage in those materials, such as crack formation and material failure.”

The study used SLAC’s high-speed electron camera — an instrument for ultrafast electron diffraction (UED) — which is capable of tracking nuclear motions with a shutter speed of about 100 millionths of a billionth of a second, or 100 femtoseconds.

The team discovered that the melting started at the surfaces of nanosized grains within the gold sample — regions in which the gold atoms neatly line up in crystals — and at the boundaries between them.

“This behavior had been predicted in theoretical studies, but we’ve now actually observed it for the first time,” said Siegfried Glenzer, head of SLAC’s High Energy Density Science Division and the study’s principal investigator. “Our method allows us to examine the behavior of any material in extreme environments in atomic detail, which is key to understanding and predicting material properties and could open up new avenues for the design of future materials.”

To study the melting process, the researchers focused the laser beam onto a sample of gold crystals and watched how the atomic nuclei in the crystals responded, using the UED instrument’s electron beam as a probe. By stitching together snapshots of the atomic structure taken at various times after the laser hit, they created a stop-motion movie of the structural changes over time.

“About 7 to 8 trillionths of a second after the laser flash, we saw the solid begin turning into a liquid,” said SLAC postdoctoral researcher Zhijang Chen, one of the study’s lead authors. “But the solid didn’t liquefy everywhere at the same time. Instead, we observed the formation of pockets of liquid surrounded by solid gold. This mix evolved over time until only liquid was left after about a billionth of a second.”

To get to this level of detail, the researchers needed a special camera like SLAC’s UED instrument, which is able to see the atomic makeup of materials and is fast enough to track extremely rapid motions of atomic nuclei.

And because the melting process is destructive, another feature of the instrument was also absolutely crucial.

“In our experiment, the sample ultimately melted and vaporized,” said accelerator physicist Xijie Wang, head of SLAC’s UED initiative. “But even if we were able to cool it down so that it becomes a solid again, it wouldn’t have the exact same starting structure. So, for every frame of the atomic movie we want to collect all the structural information in a single-shot experiment — a single pass of the electron beam through the sample. We were able to do just that because our instrument uses a very energetic electron beam that produces a strong signal.”

Materials provided by DOE/SLAC National Accelerator Laboratory. Note: Content may be edited for style and length.