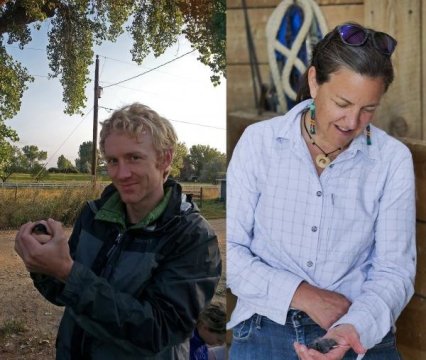 The evolution of barn swallows, a bird ubiquitous to bridges and sheds around the world, might be even more closely tied to humans than previously thought, according to new study from the University of Colorado Boulder.

The research, published this week in Molecular Ecology, offers preliminary insight suggesting that the barn swallow and its subspecies evolved alongside — but independently from — humans. These new results make it one of the only known species, in addition to microscopic organisms like bacteria or viruses, to have developed in such a way, upending previous assumptions that barn swallows evolved prior to human settlement.

“Humans could be a really big part of the story,” said Rebecca Safran, a co-author of the study and an ecology and evolutionary biology (EBIO) associate professor at CU Boulder. “There’s very few studies that can point to the exact influence of humans, and so here, this coincidence of human expansion and permanent settlement and the expansion of a group that relies really, really heavily on humans is compelling.”

Barn swallows are found across the northern hemisphere and are characterized by their mud-cup nests that are built nearly exclusively on human-made structures. Despite their prevalence, however, not much is known about their evolutionary history, the timing of their expansion from northern Africa (where they originated) or how the six subspecies evolved so physically and behaviorally different yet remain almost genetically identical.

Previous studies published in the Proceedings of the Royal Society of London and Molecular Phylogenetics and Evolution looked into these questions and found that the different subspecies split early, well before human settlement.

This new study, however, gave the topic a fresh look by examining the whole genome of 168 barn swallows from the two sub-species farthest apart on an evolutionary scale: H. r. savignii in Egypt (a non-migratory species that lives along the Nile) and H. r. erythrogaster in North America (a species found throughout North America that migrates seasonally to South America).

These data — which are on the order of 100,000 times bigger than the previous dataset used — were then analyzed with more sophisticated computational resources and methods than previously available. This allowed researchers to get a more complete picture that places the timing of barn swallow differentiation or speciation (i.e., when the barn swallow subspecies separated) closer to that of when humans began to build structures and settlements.

“The previous studies were playing with the idea of potential impact on population sizes due to humans,” said Chris Smith, a graduate student in EBIO and the Interdisciplinary Quantitative Biology program, and the study’s lead author. “Our results suggest a much more substantial link with humans.”

These new preliminary findings also suggest that this evolutionary link may have been forged through a “founder event,” which is when a small number of individuals in a species take over a new environment and are able to expand their new population there thanks to an availability of resources and an absence of competitors. For barn swallows, this event may have occurred rapidly when they moved into a new, relatively empty environment: alongside humans.

“Everyone is always wondering how do you study speciation? It’s been viewed as this long-term, million-year (process), but in barn swallows, we are not talking about differentiation within several thousands of years,” said Safran. “Things are really unfolding rather rapidly.”

Materials provided by University of Colorado at Boulder. Original written by Cay Leytham-Powell. Note: Content may be edited for style and length.