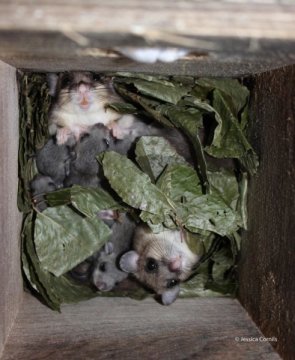 Edible dormice are extremely long-lived for their size thanks to their seasonal dormancy. The animals are veritable record holders in this “discipline,” with hibernation periods lasting between at least six and a maximum of eleven months. The factors influencing the variable duration of the hibernation period, apart from the specific environmental conditions, have so far been unknown. Researchers at Vetmeduni Vienna hypothesised that older animals should shorten their winter dormancy in favour of a reproductive advantage. This hypothesis has now been confirmed in a database analysis, published in Scientific Reports, of dormice populations living in large outdoor enclosures. The shortened winter hibernation of aging males and females were due to an increase in reproductive activity. Older animals also delay the onset of hibernation and emerge earlier in the season.

Mammals usually have a clear correlation between body size and life history, with smaller species tending to have a shorter lifespan. Various strategies exist, however, through which small mammals, including several species of rodents, can extend their lifespan. One of the most successful of these strategies, besides flight or arboreality to escape ground predation, is hibernation. Animals like the edible dormouse (Glis glis) hibernate to avoid predators and to get through seasonal periods of low food availability. Dormice are true “sleepyheads,” with an average length of dormancy between eight and nine months. The benefit of torpor, with a considerably reduced metabolism, is an exceptionally high life expectancy of up to 13 years. This makes them the Methuselah among the otherwise short-lived small rodents.

Nevertheless, older dormice appear to deliberately shorten their dormancy period, thus sacrificing the safety and life-prolonging effect of hibernation. So far, however, there had been no clear evidence that age even has an effect on hibernation and whether there was an age-related correlation between the investment in reproduction and winter dormancy. Researchers from the Institute of Wildlife Ecology at Vetmeduni Vienna could now show for the first time that the onset of hibernation is delayed in older animals, that the animals emerge earlier, and that the dormancy period is generally shorter because the older animals invest more energy in reproduction.

The evaluation of the data, which had been collected over a period of ten years from a dormouse population kept under natural conditions, revealed that the observed shorter winter dormancy in older animals was due to their own reproductive pressure regardless of sex. Dormice with offspring invest a lot of energy into raising their young and enter hibernation later. Late hibernators include not only mother animals, however; even males remain active longer. “After all, the guys can’t afford to miss a potential mating opportunity should a female lose her litter and again become receptive,” explains study director Claudia Bieber. “In fact, edible dormice do not show any age-related decline in reproduction. Actually, the older the animal, the larger the litter.” These rodents remain sexually active even at an advanced age, and the pressure on the animals to remain reproductively successful thus outweighs the potential risk of predation or lack of food reservoirs.

The data analysis also confirmed that the animals, regardless of their reproductive success in the previous year, emerge from hibernation earlier the older they are. “With the decreasing chances of surviving another year, older animals accept the risk of being taken by a predator,” Bieber says. The pressure on potential predators such as owls, is especially high during early spring as these animals must provide their own young with food at this time of year. But early emergence also allows dormice to more easily occupy high-quality food territories, which considerably influences their ability to successfully rear their young. Young dormice, on the other hand, spend more time in the safety of their underground burrows, as they still have a long life ahead of them and are not under the same pressure to reproduce.

The semi-natural conditions of a protected enclosure did not influence the data, Bieber confirms. “We made sure to have fluctuating food conditions, foxes and owls were present around the enclosures, and the dormice clearly reacted to their presence. The animals also responded with a higher alertness when humans approached the enclosures.” Taking into account the risk of predation and the food conditions, the age-related observations could not be simply explained as a learning effect. An increased investment in reproduction with age was also observed in a free-living population. “Our results are far-reaching and are a confirmation of life history theory, according to which species should always pursue a strategy that ensures a maximum number of offspring. Our study clearly demonstrates that winter dormancy is not only a strategy to save energy during periods of low food availability but that, depending on the age of the animals, hibernation duration is flexible to ensure as long a life as possible with many offspring,” says Bieber.