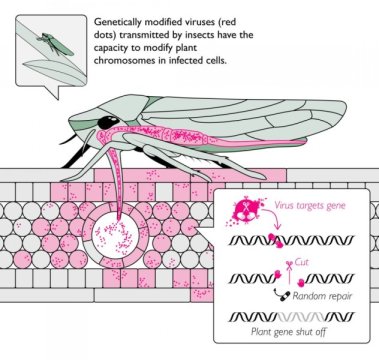 Owing to present-day armed conflicts, the general public is well aware of the terrifying effects of chemical weapons. Meanwhile, the effects of biological weapons have largely disappeared from public awareness.

A project funded by a research agency of the US Department of Defense is now giving rise to concerns about being possibly misused for the purpose of biological warfare. The programme called ‘Insect Allies’ intends for insects to be used for dispersing genetically modified viruses to agricultural plants in fields. These viruses would be engineered so they can alter the chromosomes of plants through ‘genome editing’. This would allow for genetic modifications to be implemented quickly and at a large scale on crops that are already growing in fields, such as corn. In the journal Science, scientists from the Max Planck Institute for Evolutionary Biology in Plön and the Institut des Sciences de l’Evolution de Montpellier along with legal scholars from the University of Freiburg point out that this type of system could be more easily developed for use as a biological weapon than for the proposed agricultural purpose.

It is argued by the programs funders, that genome editing using synthetic viruses will open up unprecedented possibilities for changing the properties of crop plants already growing in fields. Plants could, for example, be genetically altered to nearly instantly become less susceptible to pests or droughts. Until now, genetic engineering of commercial seeds always occurred in laboratories. With farmers planting seeds, needing to anticipate what environmental conditions will likely arise during a growing season. This means that, in the case of an unexpected drought, only farmers who had already planted drought-resistant seeds would gain a benefit. However, the originators of this project claim that genetic engineering in fields would offer farmers the possibility to alter the genetic properties of their crops at any time. Use of this technology would represent a radical break with many existing farming practices, potentially jeopardizing their coexistence.

At the end of 2016, DARPA (Defense Advanced Research Projects Agency) put out a call for tenders for a 4-year research work plan. This program has distributed a total of 27 million US dollars, aiming to develop genetically modified viruses that can genetically edit crops in fields. The first of three consortia, drawn from 14 American research facilities, announced their participation in mid-2017. Maize and tomato plants are reportedly being used in current experiments, while dispersal insect species mentioned include leafhoppers, whiteflies, and aphids. The DARPA work plan will culminate in large-scale greenhouse demonstrations of the fully functional system including insect-dispersed viruses.

In public statements, DARPA asserts that developments resulting from the Insect Allies Program are intended for routine agricultural use, for example for protecting crops against droughts, frost, flooding, pesticides or diseases. However, most countries using such technology would require comprehensive changes to approval processes for genetically modified organisms. Farmers, seed producers and not least the general public would also be massively affected by a use of such methods. “There is hardly any public debate about the far-reaching consequences of proposing the development of this technology. The Insect Allies programme is largely unknown, even in expert circles,” says Guy Reeves of the Max Planck Institute for Evolutionary Biology in Plön.

However, scientists and legal scholars from Plön, Freiburg and Montpellier believe that a broad social, scientific and legal debate of the issue is urgently required. Among other concerns it is their opinion, that no compelling reasons have been presented by DARPA for the use of insects as an uncontrolled means of dispersing synthetic viruses into the environment. Furthermore, they argue the findings of the Insect Allies Program could be more easily used for biological warfare than for routine agricultural use. “It is very much easier to kill or sterilize a plant using gene editing than it is to make it herbicide or insect-resistant,” explains Reeves. Considering these, and other, concerns articulated in the Science article, the DARPA programme risks being perceived as a program that is not justified for peaceful purposes, as is required according to the Biological Weapons Convention. This, in turn, may lead to other countries developing their own weapons in this area.

In international law, the decisive factor is whether a biological research programme exclusively serves peaceful purposes. The Biological Weapons Convention, to which more than 180 States are parties, obliges all parties to never under any circumstances develop or produce agents or toxins of types or in quantities “that have no justification for prophylactic, protective or other peaceful purposes.” In addition, the Convention prohibits to develop or produce “weapons, equipment or means of delivery designed to use such agents or toxins for hostile purposes or in armed conflict.” The authors argue that the insects used to deliver the viral agents might be perceived as means of delivery in terms of the Convention.

“Because of the broad ban of the Biological Weapons Convention, any biological research of concern must be plausibly justified as serving peaceful purposes. The Insect Allies Program could be seen to violate the Biological Weapons Convention, if the motivations presented by DARPA are not plausible. This is particularly true considering that this kind of technology could easily be used for biological warfare,” explains Silja Vöneky, a law professor from Freiburg University.

The authors of the Science article are also concerned that the Insect Allies Program might encourage other states to increase their own research activities in this field — regardless of whether this program proves to be technically successful or not. Past efforts for banning the development of biological weapons have shown how important it is that this ban be applied by states such as the USA, who are considered an example by other countries. Based on this, the authors propose that the US should make proactive efforts to avoid any suspicion of engaging technologies that have the alarming potential for use in biological warfare.