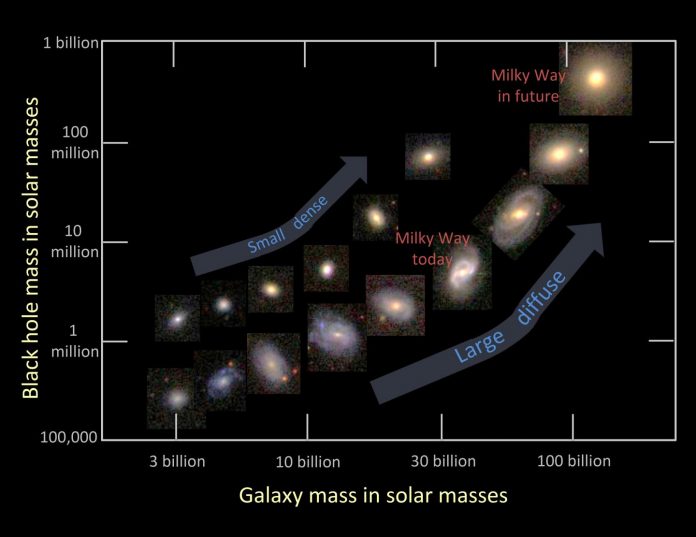 Astronomers studying galaxy evolution have long struggled to understand what causes star formation to shut down in massive galaxies. Although many theories have been proposed to explain this process, known as “quenching,” there is still no consensus on a satisfactory model.

Now, an international team led by Sandra Faber, professor emerita of astronomy and astrophysics at UC Santa Cruz, has proposed a new model that successfully explains a wide range of observations about galaxy structure, supermassive black holes, and the quenching of star formation. The researchers presented their findings in a paper published July 1 in the Astrophysical Journal.

The model supports one of the leading ideas about quenching which attributes it to black hole “feedback,” the energy released into a galaxy and its surroundings from a central supermassive black hole as matter falls into the black hole and feeds its growth. This energetic feedback heats, ejects, or otherwise disrupts the galaxy’s gas supply, preventing the infall of gas from the galaxy’s halo to feed star formation.

“The idea is that in star-forming galaxies, the central black hole is like a parasite that ultimately grows and kills the host,” Faber explained. “That’s been said before, but we haven’t had clear rules to say when a black hole is big enough to shut down star formation in its host galaxy, and now we have quantitative rules that actually work to explain our observations.”

What that means, Faber explained, is that larger galaxies (those with larger radii for a given stellar mass) have to evolve further and build up a higher stellar mass before their central black holes can grow large enough to quench star formation. Thus, small-radius galaxies quench at lower masses than large-radius galaxies.

“That is the new insight, that if galaxies with large radii have smaller black holes at a given stellar mass, and if black hole feedback is important for quenching, then large-radius galaxies have to evolve further,” she said. “If you put together all these assumptions, amazingly, you can reproduce a large number of observed trends in the structural properties of galaxies.”

Faber emphasized that the model does not yet explain in detail the physical mechanisms involved in the quenching of star formation. “The key physical processes that this simple theory evokes are not yet understood,” she said. “The virtue of this, though, is that having simple rules for each step in the process challenges theorists to come up with physical mechanisms that explain each step.”

Astronomers are accustomed to thinking in terms of diagrams that plot the relations between different properties of galaxies and show how they change over time. These diagrams reveal the dramatic differences in structure between star-forming and quenched galaxies and the sharp boundaries between them. Because star formation emits a lot of light at the blue end of the color spectrum, astronomers refer to “blue” star-forming galaxies, “red” quiescent galaxies, and the “green valley” as the transition between them. Which stage a galaxy is in is revealed by its star formation rate.

One of the study’s conclusions is that the growth rate of black holes must change as galaxies evolve from one stage to the next. The observational evidence suggests that most of the black hole growth occurs in the green valley when galaxies are beginning to quench.

Faber and her collaborators have been discussing these issues for many years. Since 2010, Faber has co-led a major Hubble Space Telescope galaxy survey program (CANDELS, the Cosmic Assembly Near-infrared Deep Extragalactic Legacy Survey), which produced the data used in this study. In analyzing the CANDELS data, she has worked closely with a team led by Joel Primack, UCSC professor emeritus of physics, which developed the Bolshoi cosmological simulation of the evolution of the dark matter halos in which galaxies form. These halos provide the scaffolding on which the theory builds the early star-forming phase of galaxy evolution before quenching.

The central ideas in the paper emerged from analyses of CANDELS data and first struck Faber about four years ago. “It suddenly leaped out at me, and I realized if we put all these things together–if galaxies had a simple trajectory in radius versus mass, and if black hole energy needs to overcome halo binding energy–it can explain all these slanted boundaries in the structural diagrams of galaxies,” she said.

At the time, Faber was making frequent trips to China, where she has been involved in research collaborations and other activities. She was a visiting professor at Shanghai Normal University, where she met first author Zhu Chen. Chen came to UC Santa Cruz in 2017 as a visiting researcher and began working with Faber to develop these ideas about galaxy quenching.

“She is mathematically very good, better than me, and she did all of the calculations for this paper,” Faber said.

Faber also credited her longtime collaborator David Koo, UCSC professor emeritus of astronomy and astrophysics, for first focusing attention on the central densities of galaxies as a key to the growth of central black holes.

In addition to Faber, Chen, Koo, and Primack, the coauthors of the paper include researchers at some two dozen institutions in seven countries. This work was funded by grants from NASA and the National Science Foundation.