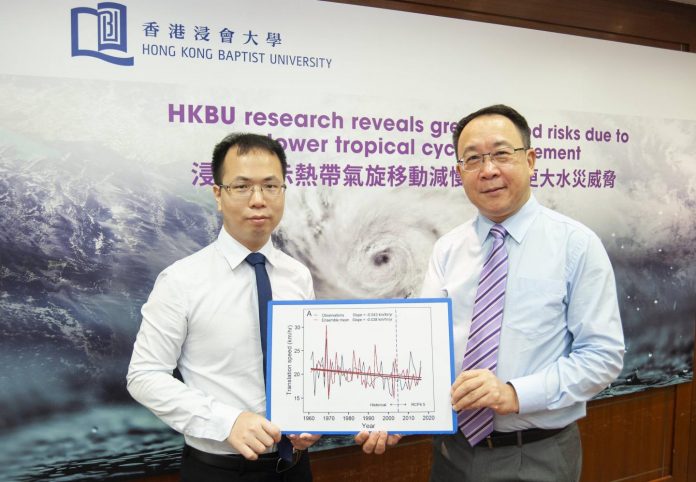 A research led by the Department of Geography at Hong Kong Baptist University (HKBU) has revealed that the observed average moving speed (or translation speed) of tropical cyclones making landfall over the coast of China dropped by 11% between 1961 and 2017. These slow-moving tropical cyclones brought about 20% more local total rainfall on average when compared with fast-moving ones, resulting in greater flood risks in the region.

The study also found that the occurrence of tropical cyclones with lower moving speeds and higher total rainfalls became more frequent after 1990 in the Pearl River Delta. The discovery offers invaluable insights that will enable the development of better flood management and adaptation strategies in the coastal region of China which is under threat due to tropical cyclones.

Over 400 tropical cyclones under study

The research team led by Dr Li Jianfeng, Assistant Professor of the Department of Geography at HKBU, studied 406 tropical cyclones which made landfall and lasted for more than two days over the coast of China, and specifically the Pearl River Delta where Hong Kong is located, between 1961 and 2017. The study, which started in 2018, aimed to investigate the trend of tropical cyclones’ moving speeds and its correlation with the volume of rainfall in the long run.

The research team analysed track data of the 406 tropical cyclones from the International Best Track Archive for Climate Stewardship (IBTrACS) and numerical simulations of eight Global Climate Models (GCMs) developed by meteorological and modelling centres around the world. IBTrACS is one of the most commonly used datasets for tropical cyclone studies, while GCMs are important tools for scientific communities to investigate and project climate behaviour.

Among the 406 tropical cyclones examined in this study, 82 affected Hong Kong and moved within 200 km of the city. Out of these 82 tropical cyclones, 22 were slow-moving, and 14 of them (about 64%) occurred after 1990. They include Typhoon York in 1999 and Severe Tropical Storm Goni in 2009 which caused extensive damage in the region.

“With analysis backed by long-term observations, we have provided evidence showing that slower tropical cyclone movement tends to elevate rainfall volume and thus it imposes greater flood risks at a regional scale. Therefore, more holistic and integrated flood risk management strategies, as well as flexible adaptation options, will be needed to deal with the growing threat of floods,” said Dr Li.

The research findings were published in the renowned scientific journal Proceedings of the National Academy of Sciences of the United States of America.