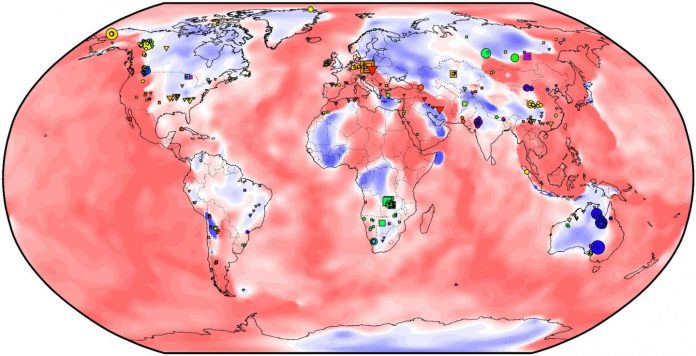 If the world is to maintain a sustainable economy and fend off the worst effects of climate change, at least one industry will soon have to ramp up dramatically: the mining of metals needed to create a vast infrastructure for renewable power generation, storage, transmission and usage. The problem is, demand for such metals is likely to far outstrip currently both known deposits and the existing technology used to find more ore bodies.

Now, in a new study, scientists have discovered previously unrecognized structural lines 100 miles or more down in the earth that appear to signal the locations of giant deposits of copper, lead, zinc and other vital metals lying close enough to the surface to be mined, but too far down to be found using current exploration methods. The discovery could greatly narrow down search areas, and reduce the footprint of future mines, the authors say. The study appears this week in the journal Nature Geoscience.

“We can’t get away from these metals-they’re in everything, and we’re not going to recycle everything that was ever made,” said lead author Mark Hoggard, a postdoctoral researcher at Harvard University and Columbia University’s Lamont-Doherty Earth Observatory. “There’s a real need for alternative sources.”

The study found that 85 percent of all known base-metal deposits hosted in sediments-and 100 percent of all “giant” deposits (those holding more than 10 million tons of metal)-lie above deeply buried lines girdling the planet that mark the edges of ancient continents. Specifically, the deposits lie along boundaries where the earth’s lithosphere-the rigid outermost cladding of the planet, comprising the crust and upper mantle-thins out to about 170 kilometers below the surface.

Up to now, all such deposits have been found pretty much at the surface, and their locations have seemed to be somewhat random. Most discoveries have been made basically by geologists combing the ground and whacking at rocks with hammers. Geophysical exploration methods using gravity and other parameters to find buried ore bodies have entered in recent decades, but the results have been underwhelming. The new study presents geologists with a new, high-tech treasure map telling them where to look.

Due to the demands of modern technology and the growth of populations and economies, the need for base metals in the next 25 years is projected to outpace all the base metals so far mined in human history. Copper is used in basically all electronics wiring, from cell phones to generators; lead for photovoltaic cells, high-voltage cables, batteries and super capacitors; and zinc for batteries, as well as fertilizers in regions where it is a limiting factor in soils, including much of China and India. Many base-metal mines also yield rarer needed elements, including cobalt, iridium and molybdenum. One recent study suggests that in order to develop a sustainable global economy, between 2015 and 2050 electric passenger vehicles must increase from 1.2 million to 1 billion; battery capacity from 0.5 gigawatt hours to 12,000; and photovoltaic capacity from 223 gigawatts to more than 7,000.

The new study started in 2016 in Australia, where much of the world’s lead, zinc and copper is mined. The government funded work to see whether mines in the northern part of the continent had anything in common. It built on the fact that in recent years, scientists around the world have been using seismic waves to map the highly variable depth of the lithosphere, which ranges down to 300 kilometers in the nuclei of the most ancient, undisturbed continental masses, and tapers to near zero under the younger rocks of the ocean floors. As continents have shifted, collided and rifted over many eons, their subsurfaces have developed scar-like lithospheric irregularities, many of which have now been mapped.

The study’s authors found that the richest Australian mines lay neatly along the line where thick, old lithosphere grades out to 170 kilometers as it approaches the coast. They then expanded their investigation to some 2,100 sediment-hosted mines across the world, and found an identical pattern. Some of the 170-kilometer boundaries lie near current coastlines, but many are nestled deep within the continents, having formed at various points in the distant past when the continents had different shapes. Some are up to 2 billion years old.

The scientists’ map shows such zones looping through all the continents, including areas in western Canada; the coasts of Australia, Greenland and Antarctica; the western, southeastern and Great Lakes regions of the United States; and much of the Amazon, northwest and southern Africa, northern India and central Asia. While some of the identified areas already host enormous mines, others are complete blanks on the mining map.

The authors believe that the metal deposits formed when thick continental rocks stretched out and sagged to form a depression, like a wad of gum pulled apart. This thinned the lithosphere and allowed seawater to flood in. Over long periods, these watery low spots got filled in with metal-bearing sediments from adjoining, higher-elevation rocks. Salty water then circulated downward until reaching depths where chemical and temperature conditions were just right for metals picked up by the water in deep parts of the basin to precipitate out to form giant deposits, anywhere from 100 meters to 10 kilometers below the then-surface. The key ingredient was the depth of the lithosphere. Where it is thickest, little heat from the hot lower mantle rises to potential near-surface ore-forming zones, and where it is thinnest, a lot of heat gets through. The 170-kilometer boundary seems to be Goldilocks zone for creating just the right temperature conditions, as long as the right chemistry also is present.

“It really just hits the sweet spot,” said Hoggard. “These deposits contain lots of metal bound up in high-grade ores, so once you find something like this, you only have to dig one hole.” Most current base-metal mines are sprawling, destructive open-pit operations. But in many cases, deposits starting as far down as a kilometer could probably be mined economically, and these would “almost certainly be taken out via much less disruptive shafts,” said Hoggard.

The study promises to open exploration in so far poorly explored areas, including parts of Australia, central Asia and western Africa. Based on a preliminary report of the new study that the authors presented at an academic conference last year, a few companies appear to have already claimed ground in Australia and North America. But the mining industry is notoriously secretive, so it is not clear yet how widespread such activity might be.

“This is a truly profound finding and is the first time anyone has suggested that mineral deposits formed in sedimentary basins … at depths of only kilometers in the crust were being controlled by forces at depths of hundreds of kilometers at the base of the lithosphere,” said a report in Mining Journal reviewing the preliminary presentation last year.

Hoggard has put the study into a global context on his website: https://mjhoggard.com/2020/06/29/treasure-maps

The paper, ‘Global distribution of sediment-hosted metals controlled by craton edge stability,’ can be obtained from: [email protected]

Lamont-Doherty Earth Observatory is Columbia University’s home for Earth science research. Its scientists develop fundamental knowledge about the origin, evolution and future of the natural world, from the planet’s deepest interior to the outer reaches of its atmosphere, on every continent and in every ocean, providing a rational basis for the difficult choices facing humanity. @LamontEarth