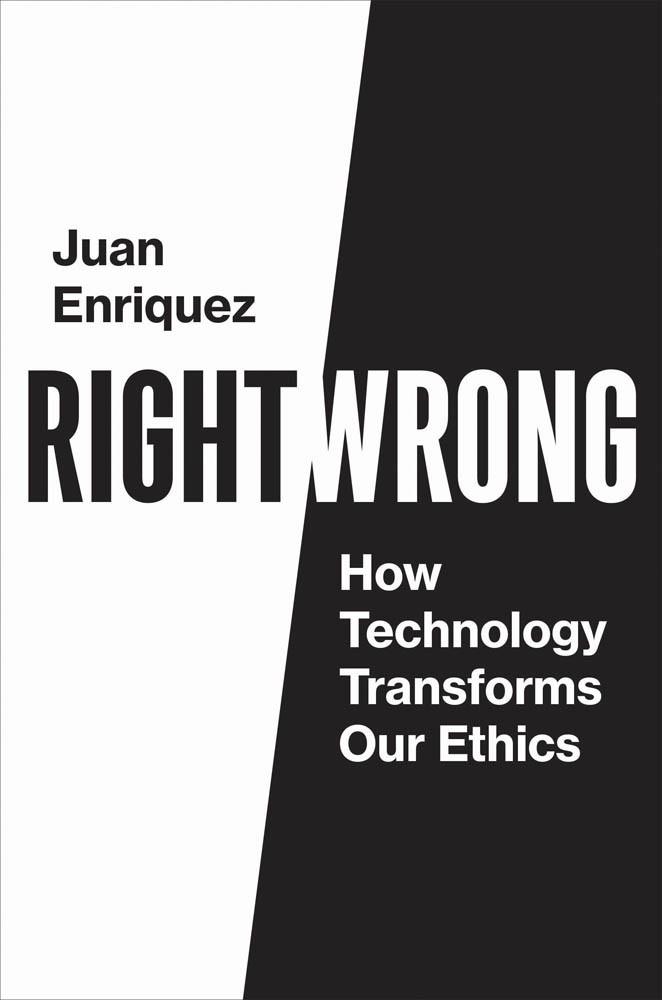 “This book will make you uncomfortable and it will make you think,” writes John Palfrey, President of the John D. and Catherine T. MacArthur Foundation, of Juan Enriquez’s Right/Wrong: How Technology Transforms Our Ethics (on sale 10/13/20 from The MIT PRESS).

Most people have a strong sense of right and wrong, and they aren’t shy about expressing their opinions. But when we take a polarizing stand on something we regard as an eternal truth, we often forget that ethics evolve over time. Many shifts in the right versus wrong pendulum are driven by advances in technology. Our great-grandparents might be shocked by in vitro fertilization; our great-grandchildren might be shocked by the messiness of pregnancy, childbirth, and unedited genes. In Right/Wrong, Juan Enriquez reflects on what happens to our ethics as technology makes the once unimaginable a commonplace occurrence.

Evolving technology changes ethics. Enriquez points out that, contrary to common wisdom, technology often enables more ethical behaviors. Technology challenges old beliefs and upends institutions that do not grow and change. With wit and compassion, Enriquez takes on a series of technology-influenced ethical dilemmas, from sexual liberation to climate change to the “immortality” of mistakes on social media. (“Facebook, Twitter, Instagram, and Google are electronic tattoos.”) He cautions us to judge those who “should have known better,” given today’s vantage point, with less fury and more compassion. We need a quality often absent in today’s charged debates: humility. Judge those in the past as we hope to be judged in the future.

Nicholas A. Christakis, author of Blueprint: The Evolutionary Origins of a Good Society, writes, “One of our nation’s deepest thinkers about the long-term implications of technology on our society here provides a riveting case-book and compelling argument about how and why the passage of time changes all ethical considerations. How does it happen? Inexorable technological advances create new opportunities to make different, and better, ethical decisions, Enriquez argues. But this comes with a price: we face the overwhelming temptation to castigate our forebears for their unethical acts. This should humble us because this means our descendants will also be judging us, when their technology improves. Vivid, stimulating, and provocative.”

Jane Metcalfe, Cofounder of Wired and Founder of NEO.LIFE, writes, “With wit, insight, and masterful storytelling, Juan Enriquez challenges our certainty about what’s right and wrong in an age of rapid biological innovation and technologies that give us the power to literally transform our species. This book shows us how inextricably linked our ethics are to our technologies and reminds us with empathy and humility that even ethics evolve.”

In our time, most are certain that their viewpoints are correct, so they confront others without humility, context, or understanding. We judge people in the past based on today’s standards, but is that fair? Do we want to be judged in the same way, in a few decades, when standards and words are viewed in a completely different context? In RIGHT/WRONG Enriquez reflects on what happens when the once unimaginable becomes a commonplace occurrence and how we can use that to be more understanding-ethical.

Juan Enriquez is a leading authority on the economic impact of life sciences and brain research on business and society as well as an entrepreneur. He was the founding Director of the Harvard Business School’s Life Sciences Project and is a research affiliate at MIT’s synthetic neurobiology lab. Following HBS, Juan became an active angel investor. He then co-founded Excel Venture Management. As a business leader, advisor, and renowned speaker, Juan works directly with the CEOs of a number of Fortune 50 companies, as well as various heads of state, on how to adapt to a world where the dominant language is shifting from the digital towards the language of life. Author and co-author of multiple bestsellers including As the Future Catches You: How Genomics Will Change Your Life, Work, Health, and Wealth (1999), The Untied States of America: Polarization, Fracturing and Our Future (2005), Evolving Ourselves: Redesigning Humanity One Gene at a Time (2015). He is a TED All-Star with nine TED talks on a variety of subjects, as well as dozens of TEDx talks. Mr. Enriquez serves on multiple for profit boards as well as a variety of non-profits including The National Academy of Sciences, The American Academy of Arts and Sciences, WGBH, The Boston Science Museum, Harvard Medical School, and Harvard’s David Rockefeller Center. He graduated from Harvard with a B.A. and an M.B.A., both with honors.