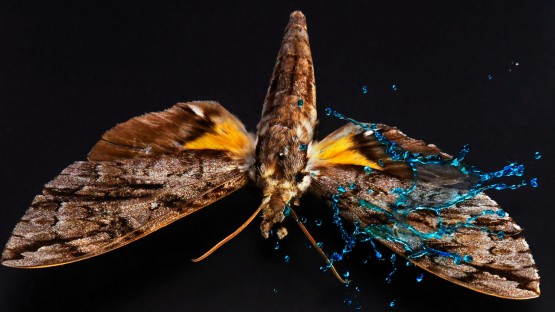 An analysis of high-speed raindrops hitting biological surfaces such as feathers, plant leaves and insect wings reveals how these highly water-repelling veneers reduce the water’s impact.

The study, “How a Raindrop Gets Shattered on Biological Surfaces,” published June 8 in the Proceedings of the National Academy of Sciences.

The research showed how microscale bumps, combined with a nanoscale layer of wax, shatter and spread these drops to protect fragile surfaces from physical damage and hypothermia risk.

There already exists a large market for products that use examples from nature – known as biomimicry – in their design: self-cleaning water-resistant sprays for clothes and shoes, and de-icing coatings on airplane wings. Findings from this study could lead to more such products in the future.

“This is the first study to understand how high-speed raindrops impact these natural hydrophobic surfaces,” said senior author Sunghwan “Sunny” Jung, associate professor of biological and environmental engineering in the College of Agriculture and Life Sciences. The lead author is Seungho Kim, a postdoctoral researcher in Jung’s lab.

Previous studies have looked at water hitting insects and plants at low impacts and have noted the liquid’s cleaning properties. But in nature, raindrops can fall at rates of up to 10 meters per second, so this research examined how raindrops falling at high speeds interact with super-hydrophobic natural surfaces.

“[Getting hit with] raindrops is the most dangerous event for this kind of small animal,” he said, noting the relative weight of a raindrop hitting a butterfly wing would be analogous to a bowling ball falling from the sky on a human.

In the study, the researchers collected samples of leaves, feathers and insects. The latter were acquired from the Cornell University Insect Collection, with the help of co-author Jason Dombroskie, collection manager and director of the Insect Diagnostic Lab.

The researchers placed the samples on a table and released water drops from heights of about two meters, while recording the impact at a few thousand frames per second with a high-speed camera.

In analyzing the film, they found that when a drop hits the surface, it ripples and spreads. A nanoscale wax layer repels the water, while larger microscale bumps on the surface creates holes in the spreading raindrop.

“Consider the micro-bumps as needles,” Jung said. If one dropped a balloon onto these needles, he said, “then this balloon would break into smaller pieces. So the same thing happens as the raindrop hits and spreads.”

This shattering action reduces the amount of time the drop is in contact with the surface, which limits momentum and lowers the impact force on a delicate wing or leaf. It also reduces heat transfer from a cold drop. This is important because the muscles of an insect wing, for example, need to be warm enough to fly.

“If they have a longer time in contact with the cold raindrop, they’re going to lose a lot of heat and they cannot fly very easily,” Jung said, making them vulnerable to predators, for example.

Repelling water as quickly as possible also is important because water is very heavy, making flight in insects and birds difficult and weighing down plant leaves.

“By having these two-tiered structures,” Jung said, “[these organisms] can have a super hydrophobic surface.”

The study was funded by the National Science Foundation and the U.S. Department of Agriculture.