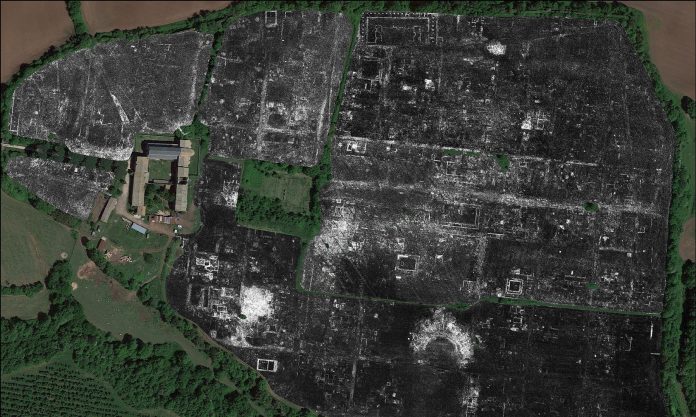 For the first time, a team of archaeologists from the Universities of Cambridge and Ghent, has succeeded in mapping a complete Roman city, Falerii Novi in Italy, using advanced ground penetrating radar (GPR). The technology has allowed them to reveal astonishing details while the city remains deep underground.

The archaeologists have discovered a bath complex, market, temple, a public monument unlike anything seen before, and even the city’s sprawling network of water pipes. By looking at different depths, they can now study how the town evolved over hundreds of years.

The research, published on 9 June 2020 in Antiquity, harnessed recent advances in GPR technology which make it possible to explore larger areas in higher resolution than ever before. This is likely to have major implications for the study of ancient cities because many cannot be excavated either because they are too large, or because they are trapped under modern structures.

GPR works like regular radar, bouncing radio waves off objects and using the ‘echo’ to build up a picture at different depths. By towing their GPR instruments behind a quad bike, the archaeologists surveyed all 30.5 hectares within the city’s walls – Falerii Novi was just under half the size of Pompeii – taking a reading every 12.5cm.

Located 50 km north of Rome and first occupied in 241 BC, Falerii Novi survived into the medieval period (until around AD 700). The team’s GPR data can now start to reveal some of the physical changes experienced by the city in this time. They have already found evidence of stone robbing.

The study also challenges certain assumptions about Roman urban design, showing that Falerii Novi’s layout was less standardised than many other well-studied towns, like Pompeii. The temple, market building and bath complex discovered by the team are also more architecturally elaborate than would usually be expected in a small city.