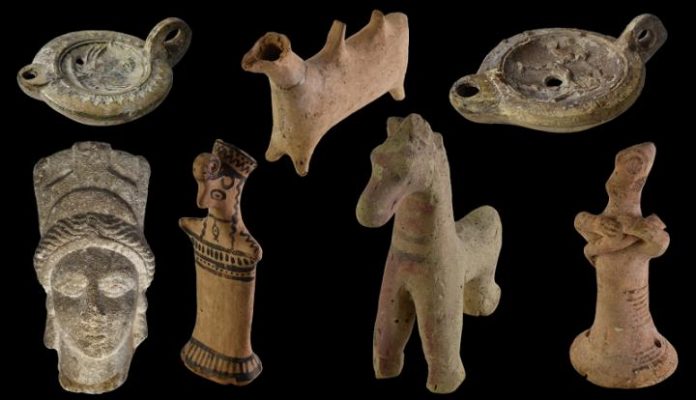 An expert in ancient history and Swansea’s Egypt Centre have been jointly awarded £1100 to develop a new display on Egypt and its neighbours, which will be used for the Centre’s education programme on issues such as identity, racism and xenophobia in the ancient world.

The award was one of two announced by the Institute of Classical Studies, with the aim of supporting public engagement work relating to the ancient world.

The successful entry was submitted by Dr Ersin Hussein of the Department of Classics, Ancient History and Egyptology, in partnership with the Egypt Centre’s Collection Access Manager Dr Ken Griffin.

The funding will help to develop a new display in the Egypt Centre museum, entitled Egypt and Its Neighbours, which will feature objects from Egypt, Greece, Rome, Cyprus, Mesopotamia, and Nubia.

The Institute for Classical Studies recently hosted an online awards event, where Dr Hussein and Dr Griffin shared more detail about their projects.

“The Egypt and its Neighbours display will be a catalyst for student and public engagement with a number of topics at the heart of today’s world, such as racism, cultural diversity, self-presentation, and identity formation. The ancient world is rich with material to encourage meaningful discussion around these issues.

Several lecturers across the department of Classics, Ancient History, and Egyptology already offer modules discussing these themes in the ancient world.

Swansea University is one of the few places in the UK offering specialist modules on Egypt, Greece, Rome, Cyprus, Nubia, and the ancient Near East. We really wanted the display to bring together the research that we do in the museum setting not just for our students, but for our visitors, from schoolchildren to the general public.”

“Our educational programme is at the heart of the Centre’s work. The award will allow us to develop the programme to include topics such as identity, diversity, racism, and xenophobia in the ancient world. In doing so, it will hopefully open up discussion on current issues.

In line with the museum’s core aim of widening participation, various groups and individuals have been consulted throughout the planning process, thus making this a co-creation project.”

Swansea University is a world-class, research-led, dual campus university offering a first-class student experience and has one of the best employability rates of graduates in the UK. The University has the highest possible rating for teaching – the Gold rating in the Teaching Excellence Framework (TEF) in 2018 and was commended for its high proportions of students achieving consistently outstanding outcomes.

Swansea climbed 14 places to 31st in the Guardian University Guide 2019, making us Wales’ top ranked university, with one of the best success rates of graduates gaining employment in the UK and the same overall satisfaction level as the Number 1 ranked university.

The 2014 Research Excellence Framework (REF) 2014 results saw Swansea make the ‘biggest leap among research-intensive institutions’ in the UK (Times Higher Education, December 2014) and achieved its ambition to be a top 30 research University, soaring up the league table to 26th in the UK.

The University is in the top 300 best universities in the world, ranked in the 251-300 group in The Times Higher Education World University rankings 2018. Swansea University now has 23 main partners, awarding joint degrees and post-graduate qualifications.

The University was established in 1920 and was the first campus university in the UK. It currently offers around 350 undergraduate courses and 350 postgraduate courses to circa 20,000 undergraduate and postgraduate students. The University has ambitious expansion plans as it moves towards its centenary in 2020 and aims to continue to extend its global reach and realise its domestic and international potential.

Swansea University is a registered charity. No.1138342. Visit http://www.swansea.ac.uk