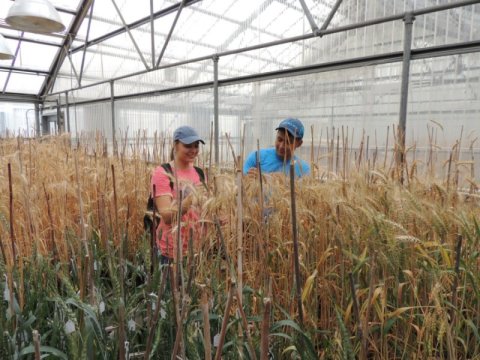 Is biofortification the best thing since sliced bread? Well, biofortified wheat could certainly make it easier to help some humans get proper nutrition.

Robert Graybosch of the USDA Agricultural Research Service explains that about 60% of the world’s population doesn’t get enough iron. This happens because the food people eat doesn’t contain enough minerals or contains what are called ‘antinutrients.’ These are molecules that prevent the body from absorbing good nutrients.

“Fortification is potentially useful as people in many parts of the world do not consume a balanced diet and their main foods lack minerals,” he says. “This can be addressed by fortification, the process of adding minerals back to food products. This is done with flours used for bread baking.”

However, some people are hesitant to eat products with what they think might be weird ingredients, he adds. Graybosch is trying to naturally enhance the minerals of wheat flours to help people around the world get more iron.

“Biofortification can be done via traditional plant breeding using natural genetic variation or natural mutations, or via genetic engineering,” he says. “If one found a mutation that resulted in more grain iron, and then bred this trait into wheat that was produced and consumed, then we could say the crop has been biofortified.”

Graybosch and his team developed experimental breeding lines of winter wheat. Breeding lines are the first step in the long process of creating a new type of wheat that farmers can grow. The team tried to combine two properties — low phytate and high grain protein — without lowering grain yield. Phytate is an antinutrient that prevents the body from taking in some minerals.

Biofortification is a delicate balance. Often, increasing the nutrition causes the overall grain yield to drop. This can lead to the wheat being overall less nutritious and can also hurt farmers’ profits.

Their results show that combining the two traits without any bad effects on grain yield is possible. It increased the amount of zinc, calcium, and manganese humans could get from it. Although more work needs to be done to get it in wheat that can be planted by farmers, the genes can be used to develop more nutritious wheat without sacrificing yield.

The next steps in their research, some of which they have already undertaken, are to then breed these beneficial genes into plants adapted for areas where wheat is grown, such as the Great Plains of the U.S.

“It is important to note that all wheat grown in a specific area is adapted to that area,” Graybosch explains. “Great Plains wheats do well in the Great Plains, but not elsewhere. If the trait is of interest in other locations, additional breeders need to start introducing it to their own backgrounds. And they are interested in doing so.”

Graybosch says his journey to this research began as he walked home from work one day. He wanted to devise a project to investigate “the most important nutritional problem facing mankind,” which he learned was likely that people weren’t getting enough iron. He and then-graduate student Jorge Venegas started to look for genes that would improve the nutrition of wheat.

“I think anything that can improve food mineral nutrition at low or no cost to the consumer is of value,” Graybosch says. “Anything we can do to improve nutrition worldwide will go a long way toward improving the lives of our fellow earthlings.”

Materials provided by American Society of Agronomy. Original written by Kaine Korzekwa. Note: Content may be edited for style and length.