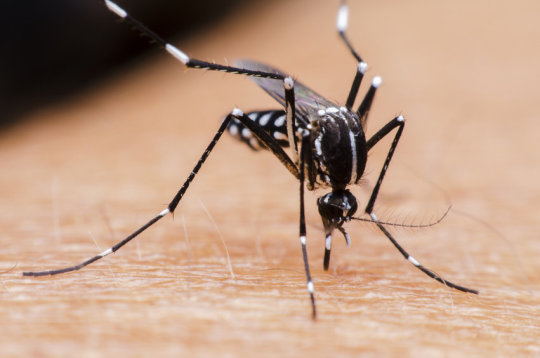 Unlike humans, who usually get hungry again only a few hours after eating, a female mosquito that has fed on human blood will lose her appetite for several days. Because movement of female mosquitoes from human to human — male mosquitoes do not consume blood — is the means by which mosquito-borne infections are passed along, researchers have theorized that reducing the frequency with which female mosquitoes feed is one way to lessen the spread of disease.

In a study publishing February 7 in the journal Cell, researchers report that they have identified drugs that can reduce mosquito hunger for blood. These compounds act on the hormone pathways that signal to a female mosquito that she’s full.

“We’re starting to run out of ideas for ways to deal with insects that spread diseases, and this is a completely new way to think about insect control,” says senior author Leslie Vosshall, a Howard Hughes Medical Institute investigator and head of the Laboratory of Neurogenetics and Behavior at Rockefeller University. “Insecticides are failing because of resistance, we haven’t come up with a way to make better repellents, and we don’t yet have vaccines that work well enough against most mosquito-borne diseases to be useful.”

The new research used Aedes aegypti mosquitoes, which spread pathogenic viruses including yellow fever, dengue, Zika, and chikungunya. Female Ae. aegypti feed on human blood to nourish their growing eggs. Because a female Ae. aegypti mosquito has several broods over the course of her lifetime, she requires multiple meals. This cycling behavior results in a number of opportunities to pass an infectious virus from one human to another.

But after consuming a meal that doubles her body weight, the female mosquito loses the drive to eat again for at least four days. Vosshall’s lab hypothesized that certain neuropeptide hormones were responsible for a mosquito’s attraction to humans and that feeding turned these pathways off. “We know these pathways are important in hunger in humans. Because they are evolutionarily conserved, we made the decision to use human diet drugs to see if they would suppress the appetite of the mosquitoes,” she explains. “Finding that the pathways work the same way in the mosquitoes gave us the confidence to move ahead with this research.”

Her lab identified a receptor called neuropeptide Y-like receptor 7 (NPYLR7) as the one that signals to the female mosquito whether or not she’s hungry. They then performed high-throughput screening in tissue culture cells of more than 265,000 compounds to determine which ones would activate the NPYLR7 receptor.

Once they identified the best candidates, they tested 24 of them, in the mosquitoes and found that compound 18 worked best. The drug was capable of inhibiting biting and feeding behaviors when the mosquitoes were introduced to the scent of a human or a source of warm blood. “When they’re hungry, these mosquitoes are super motivated. They fly toward the scent of a human the same way that we might approach a chocolate cake,” Vosshall says. “But after they were given the drug, they lost interest.”

More work must be done before a compound can be developed for mosquito control. Researchers need to further understand the basic biology of the receptor and how it might best be exploited. In addition, future studies would need to focus on how to best get the drugs to the mosquitoes. One idea is a feeder that would attract the females to come and drink the drug rather than drinking blood.

Vosshall notes that if the techniques prove effective, they are likely to work with other kinds of mosquitoes, such as those that spread malaria, as well as other arthropods that feed on human blood, including the ticks that spread Lyme disease.

“Another benefit to this approach is that the effects of the drug are not permanent,” she concludes. “It reduces the appetite for a few days, which will also naturally reduce reproduction, but it doesn’t attempt to eradicate mosquitoes, an approach that could have many other unintended consequences.”