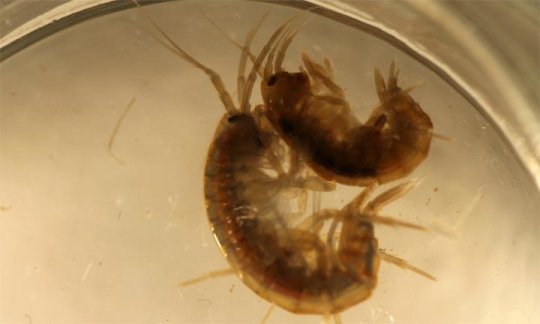 Amphipods of the species Gammarus roeselii guard their chosen mates, often carrying them with them for days and defending them against potential rivals. This behavior requires a lot of time and energy, so that the males make their choice with care. Scientists at Goethe University have now investigated under which circumstances males are prepared to revise their decision.

In their study, Carolin Sommer-Trembo, Konrad Lipkowski and their two colleagues compare the behaviour of Gammarus males from two populations with very different densities. They collected test animals from two neighbouring areas and let them acclimate for a few days in large aquariums. During this time, pairs formed, with the males firmly grasping the female and not letting her go before fertilization (amplectant pair).

In the next step, the amplectant pairs were carefully separated from one another, and each male was offered another (morphologically similar) female, one they had not previously selected of their own accord. The males from the populations with a very low density grasped the female within a short period. As expected, they were not particularly choosy, since they seldom encountered females in their natural environment and therefore had to seize the opportunity immediately.

The males from the population consisting of many individuals spent a significantly longer period searching through their small test basin for an alternative (hopefully better) female, before accepting the female selected by the researchers. “Often, an amplectant pair didn’t even come about,” Carolin Sommer reports. “If, after separation, we returned the female the male itself had selected, the male accepted it just as quickly as the males from the other population accepted a new female.”

The amphipods, which are only millimetres-long, are therefore definitely choosy, with the degree of choosiness depending on the population density in their natural environments. “The population density has enormous influence on whether the male can afford to take a closer look at his mate,” concludes Konrad Lipkowski.