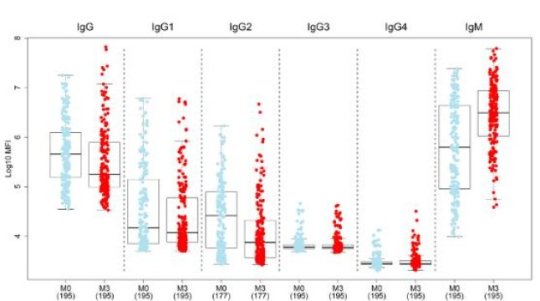 Certain type of antibodies against α-Gal- a carbohydrate expressed by many organisms including the malaria parasite- could protect against malaria, according to a new study led by ISGlobal, an institution supported by “la Caixa” Foundation. The results, published in Scientific Reports, indicate that a-Gal is an interesting candidate to include in future vaccines against malaria and other infectious diseases.

The magnitude and type of immune response against the malaria parasite is key in controlling the disease. To date, most studies have focused on the antibody response to parasite proteins. However, sugars (or glycans) expressed on the surface of the parasite could also trigger an immune response.

Alpha-gal is a particularly interesting glycan: it is expressed by practically all organisms on the evolutionary scale, from bacteria in out gut, to pathogenic bacteria such as Salmonella, protozoan parasites such as P. falciparum (that causes malaria) or mammals such as cows. Only humans, apes and old-world monkeys lack the enzyme to synthesize it and generate a strong immune response against it. Recent studies suggest that antibodies to α-Gal could protect against malaria.

In this study, the teams led by Luis Izquierdo and Carlota Dobaño, ISGlobal researchers, joined forces to assess the magnitude and type of antibody responses against α-Gal in infants and children from Mozambique (a low malaria transmission region) and Ghana (a high transmission region). They used a technique recently developed by Dobaño’s group that allowed measuring for the first time different subclasses of antibodies against this and other parasite antigens in a single reaction and from one drop of blood.

“The relevance of this study is that it provides new information on a response (anti α-Gal) that plays a potential protective role against a variety of infectious diseases, not only malaria,” explains Dobaño.

The results show that the levels of different α-Gal antibodies vary according to age and are higher in low malaria transmission zones. A significant increase in IgM ?-Gal antibodies was observed in the initial months of life, while IgG antibodies increased later in life. Importantly, an IgM response was associated with protection against clinical malaria, especially in the first months of life, while total IgG were associated with malaria risk.

READ  Study: How we see others' emotions depends on our pre-conceived beliefs -- (Details)

“It would be really interesting to identify the specific α-Gal glycan expressed by the malaria parasite, and to confirm the potential association between certain IgG subclasses and protection,” says Izquierdo. “In any case, these results confirm that α-Gal could be a promising molecule to include in future malaria vaccines,” he adds.