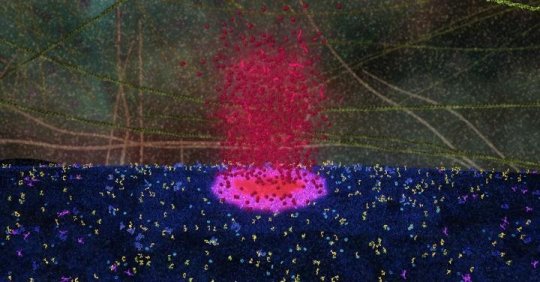 An important component of the microscopic machinery that drives cell death has been identified by Walter and Eliza Hall Institute scientists.

Studying the ‘pro-death’ machinery that forces damaged, diseased or unwanted cells to die, the research team revealed a protein called VDAC2 was critical for the function of a key pro-death protein called Bax.

A key protein in the cell death machinery is called Bax, Dr van Delft said. “Bax helps to take a cell to a ‘point of no return’ when apoptotic cell death is triggered, forming pores in mitochondria, the powerhouses of the cell. This unleashes the final ‘executioner’ proteins that dismantle a cell.

“Understanding how Bax functions could lead to new therapeutics that either promote cell death — with applications for diseases such as cancer — or therapeutics that prevent cell death, which have the potential to save cells in conditions such as neurodegenerative disorders or stroke,” he said.

“To our surprise we discovered a gene that was essential for the function of Bax but not Bak, despite these two proteins being functionally and structurally very similar.

“We were able to follow up on this research to show that the protein, called VDAC2, was a catalyst that helped Bax associate with mitochondria and form pores in their membranes, to kill the cell,” Associate Professor Dewson said. “Intriguingly VDAC2’s ‘day job’ is to maintain the function of the mitochondria, pumping metabolites in and out of the mitochondria.”

A failure of the cell death machinery is a hallmark of cancer cells, and is linked to the resistance of cancer cells to anti-cancer treatments, said Professor Huang.

“Bax is important for helping anti-cancer agents kill cells — without Bax and its relative Bak, cancer cells cannot undergo apoptosis when treated with a range of anti-cancer therapies.

“Our research showed that VDAC2 is required for Bax to drive the response of cancer cells to conventional chemotherapy agents as well as the recently developed BH3-mimetics,” Professor Huang said.

Materials provided by Walter and Eliza Hall Institute. Note: Content may be edited for style and length.