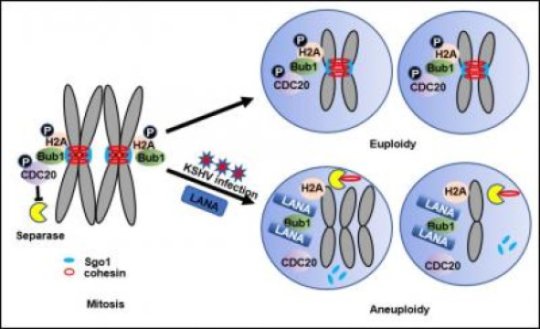 New insights into how Kaposi’s sarcoma-associated herpesvirus (KSHV) induces genome instability and promotes cell proliferation could lead to the development of novel antiviral therapies for KSHV-associated cancers, according to a study published September 13 in the open-access journal PLOS Pathogens by Erle Robertson of the University of Pennsylvania, and colleagues.

KSHV is associated with human malignancies and disorders marked by the excessive growth of white blood cells. KSHV-associated diseases are characterized by genetic alterations driven by chromosomal instability, as seen in numerous viral-associated cancer cells. It is still not entirely clear how viruses such as KSHV promote tumor growth. In the new study, Robertson and colleagues addressed this question by examining the molecular underpinnings of KSHV-induced chromosomal instability.

The findings reveal a novel mechanism by which a KSHV protein called LANA drives chromosomal instability. LANA directly induces aneuploidy — an abnormal number of chromosomes — and promotes cell proliferation. Specifically, this protein disrupts chromosome stability by inhibiting Bub1 phosphorylation of H2A and Cdc20, resulting in the dislocation of Shugoshin-1. Moreover, the NNLS domain of LANA plays key role in LANA-induced aneuploidy and cell proliferation. According to the authors, NNLS could be a promising target for the development of antiviral therapies for KSHV-associated cancers.

“Oncogenic viruses have developed strategies that are geared towards their survival,” the authors add. “Shugoshin-1 displacement is at the heart of viral genome survival and persistence in future generations of daughter cells.”