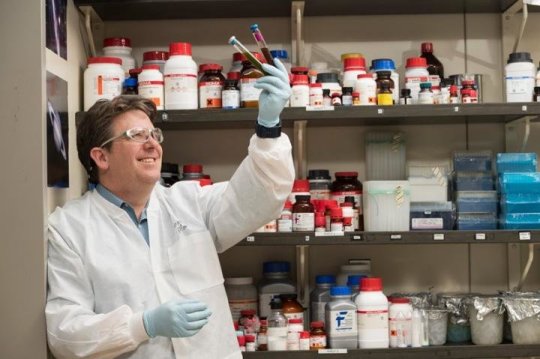 Almost 20 years ago, the University of Delaware’s Tom Hanson started studying the bacterium Chlorobaculum tepidum (Cba. tepidum), an organism that only lives in volcanic hot springs, to understand how it captures energy from light and chemicals to grow in that environment. Among the reasons to study the organism, Cba. tepidum is one of the microbes that re-oxidizes sulfide, a compound toxic to humans. Because of Cba. tepidum and its relatives, we can live near parts of the earth where sulfide is produced by other lifeforms, like the ocean.

Now, in a paper published in mBio, the open access journal of the American Society for Microbiology, Hanson and his colleagues have uncovered a pattern across all of life that had never been seen before, all by trying to figure out how one microbe from a hot spring makes a living.

Hanson, a microbiologist in the School of Marine Science and Policy in UD’s College of Earth, Ocean and Environment, said that it is important to understand microbes because without them, human life would not exist.

Hanson has been specifically interested in microbes that are involved in working on sulfur, saying that just as humans breathe oxygen and make water, which is harmless, there are some organisms that breathe sulfur and make sulfide, which is toxic.

If there were not organisms that re-oxidize that sulfide, humans couldn’t live anywhere near the oceans. Luckily for us, organisms like Cba. tepidum find hydrogen sulfide delicious.

“We think about hydrogen sulfide as rotten egg, and they think Snickers bar,” said Hanson.

Relatives of Cba. tepidum are present in waters as close to Delaware as the Chesapeake Bay. Luckily for life in the bay, they are present to consume their sulfide Snickers bars, keeping a cap on the sulfide coming out of the anoxic bottom water of the Chesapeake Bay and helping to keep the upper waters of the bay oxygenated.

Cba. tepidum cannot grow in the presence of oxygen, and Hanson said that he got interested in the bacterium because while it acts like a plant in that it takes light energy and carbon dioxide to make biomass, it does so in a very different way. One key difference is that while plants use water in this process and make oxygen, Cba. tepidum uses hydrogen sulfide and makes sulfate. Hanson’s lab has been working to try to discover how exactly Cba. tepidum was converting hydrogen sulfide into sulfate.

Other microbiologists had a hypothesis that the process of converting hydrogen sulfide back to sulfate was going to involve an organic chemical compound known as low-molecular weight thiols, which are made by all life. Thiols protect cells from oxidative stress and help them detoxify toxic chemicals in the environment.

Hanson and his team began investigating thiols produced by Cba. tepidum and ultimately made two significant findings in their search for possible mechanisms for the hydrogen sulfide-sulfate conversion.

First, they found a new thiol made by Cba. tepidum turns out to be among the most widely distributed among life on Earth. Second, they showed that, despite what they and other researchers thought, this thiol does not directly help Cba. tepidum to metabolize hydrogen sulfide to sulfate, disproving the common hypothesis.

Jennifer Hiras, a former doctoral student in Hanson’s lab at UD who now works for Corning Inc., was the one to uncover a low-molecular weight thiol that science had never seen before. Because it was a novel thiol, she and Hanson didn’t know exactly what they had found.

By breaking up the molecule and looking at the pieces in a mass spectrometer, they were able to say that the newly discovered thiol shared some pieces with a thiol called bacillithiol (BSH), which is found in soil bacteria. Hanson said that these soil bacteria are as different from Cba. tepidum as humans are from oak trees. They could tell this new thiol had extra carbon and hydrogen atoms on it but were not sure exactly where they were on the molecule.

Luckily for them, Chris Hamilton, a chemist at the University of East Anglia, had read Hiras’ dissertation and offered to help by making versions of bacillithiol with extra carbon and hydrogen atoms.

“Chris has worked on bacillithiol and could make candidate molecules in a test tube,” said Hanson. “He came up with two likely candidates for what the new molecule could be. His lab made them, and one of them turned out to behave exactly like the molecule we find in Cba. tepidum.”

Because they knew the structure of this lab-made molecule, the group was able to determine that Cba. tepidum modifies bacillithiol by putting a methyl group on a nitrogen atom to make N-methyl-bacillithiol (N-Me-BSH), which is the name of the newly discovered compound.

This allowed them to look for genes in Cba. tepidum that encode methyltransferases, but where they didn’t know how those enzymes helped Cba. tepidum grow — which are known as orphan enzymes.

“Microbial genomes contain genes that encode a lot of orphan enzymes,” said Hanson. “One of my goals in science is to give orphan enzymes homes; I want to find out how these enzymes help microbes make a living in the world.”

Using two candidate orphan methyltransferases, Vidhya Raman, a postdoc in Hanson’s lab who now works at the Noble Research Institute, was able to make strains of Cba. tepidum where the genes for these two methyltransferases had been deleted. She found that one orphan strain no longer made N-Me-BSH but only made BSH. She also deleted genes for bacillithiol synthesis and showed those strains no longer made N-Me-BSH or BSH.

By analyzing those strains, Hanson’s group showed that the hypothesis that a low-molecular weight thiol is used to carry sulfur atoms during sulfur metabolism is wrong. Instead, the strains that couldn’t make the thiols were still able to completely metabolize hydrogen sulfide to sulfate.

“Working in Cba. tepidum, an organism that only lives in volcanic hot springs, we found this new molecule and can say exactly what genes are required to allow microbes to make it,” said Hanson.

Using this new information, they were able to use gene sequences to predict what thiols different organisms make. Collaborating with Javiera Norambuena, a doctoral student from Rutgers University, they tested these predictions in other bacteria and showed they were accurate.

Their work suggests that bacillithiol and related molecules like N-Me-bacillithiol are far more widespread across all forms of life, appearing to be the most broadly distributed low molecular weight thiols in biology.

“Our human cells use a thiol called glutathione. Glutathione has had a lot of attention paid to it because it is in humans and plants, but it turns out our analysis indicates that glutathione is actually much less widespread across all of life than other thiols,” said Hanson. “This shows how biology and evolution can generate different paths to the same end: a thiol that protects cells from oxidative stress and toxic chemicals. In this case, the solution in humans and plants isn’t the only one or even the most common one.”