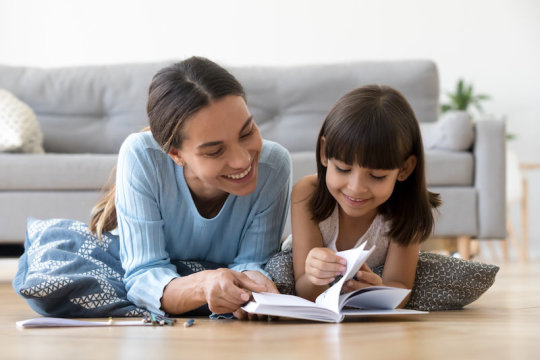 Some languages — like English — are tricky to pick up easily.

Young children learning to read and write English often need to identify patterns in words to be able to read and spell them. For example, knowing the “Magic E” syllable pattern can allow a child to understand why an E at the end of a word like “rate” significantly alters the word’s sound from “rat.”

Also, knowing that the words “one” and “two” are irregularly spelled helps prevent the child from trying to sound out the underlying sounds when seeing the word in print.

Parents who understand such language complexity — what is known as reading-related knowledge — are able to spot the difficulties and explain them. They also tend to pass on those skills when they listen to their children read, which in turn helps reading development.

These are among the findings of a new study, published in the Journal of Research in Reading, by two researchers from Concordia’s Department of Education. They report that parents with higher reading-related knowledge are not only more likely to have children with higher reading scores but are also more attentive when those children read out loud to them.

The value of feedback

Seventy sets of six- and seven-year-old children and their parents participated in the study. The children were administered reading tests and were then provided with reading material at a level just above their performance level. This extra difficulty was intentional, as it provided opportunities for the parents to step in and lend a hand.

The parents were instructed to help their children as they normally would while their children read to them. The sessions were videotaped, transcribed and coded for evidence of parents’ verbal and non-verbal feedback.

“We were interested in looking at two forms of feedback,” says Aviva Segal, who co-wrote the paper as part of her now-completed PhD with her supervisor, Sandra Martin-Chang, associate professor of education. “The first was commenting on how the child was doing, the second was measuring how the parent responded when the child hesitated or made a mistake.”

The learning was not all one-way, Segal notes. She says there were incidents when parents appeared to learn something about language while their children made mistakes reading to them.

“So, through these exchanges, parents might have been increasing their own reading-related knowledge based on what their children were displaying.”

This study has significant classroom implications as well.

“Reading-related knowledge is an important tool that many schools of education gloss over. This can lead teachers to provide negative feedback and criticism, which can cause self-doubt in children and discourage them from taking risks,” says Martin-Chang.

“Teachers with high reading-related knowledge are often more positive and better equipped to offer precise feedback to their students. They have a sense of how hard it is for the child,” she adds.

“Being able to target the right skills while at the same time praising the child’s efforts will make the classroom a more positive setting. This can be achieved through increasing teachers’ reading-related knowledge, which is a core focus of our training at Concordia.”

Segal and Martin-Chang both believe parents should be encouraged to play with language and to pay attention to its characteristics.

“Have fun with it. Listen to song lyrics with your 7-year-old and figure out what rhymes,” urges Martin-Chang.

“Even at the dinner table, play with words that start with the same sounds. When you do this, be sensitive and positive because these fun bonding interactions can become especially powerful.”