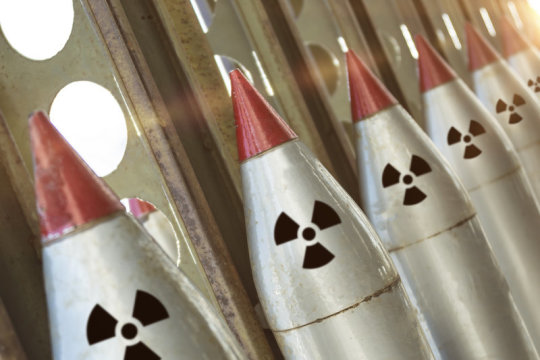 How do weapons inspectors verify that a nuclear bomb has been dismantled? An unsettling answer is: They don’t, for the most part. When countries sign arms reduction pacts, they do not typically grant inspectors complete access to their nuclear technologies, for fear of giving away military secrets.

Instead, past U.S.-Russia arms reduction treaties have called for the destruction of the delivery systems for nuclear warheads, such as missiles and planes, but not the warheads themselves. To comply with the START treaty, for example, the U.S. cut the wings off B-52 bombers and left them in the Arizona desert, where Russia could visually confirm the airplanes’ dismemberment.

It’s a logical approach but not a perfect one. Stored nuclear warheads might not be deliverable in a war, but they could still be stolen, sold, or accidentally detonated, with disastrous consequences for human society.

“There’s a real need to preempt these kinds of dangerous scenarios and go after these stockpiles,” says Areg Danagoulian, an MIT nuclear scientist. “And that really means a verified dismantlement of the weapons themselves.”

Now MIT researchers led by Danagoulian have successfully tested a new high-tech method that could help inspectors verify the destruction of nuclear weapons. The method uses neutron beams to establish certain facts about the warheads in question — and, crucially, uses an isotopic filter that physically encrypts the information in the measured data.

A paper detailing the experiments, “A physically cryptographic warhead verification system using neutron induced nuclear resonances,” is being published today in Nature Communications. The authors are Danagoulian, who is the Norman C. Rasmussen Assistant Professor of Nuclear Science and Engineering at MIT, and graduate student Ezra Engel. Danagoulian is the corresponding author.

The experiment builds on previous theoretical work, by Danagoulian and other members of his research group, who last year published two papers detailing computer simulations of the system. The testing took place at the Gaerttner Linear Accelerator (LINAC) Facility on the campus of Rensselaer Polytechnic Institute, using a 15-meter long section of the facility’s neutron-beam line.

The experiments consisted of sending a horizontal neutron beam first through a proxy of the warhead, then through a lithium filter scrambling the information. The beam’s signal was then sent to a glass detector, where a signature of the data, representing some of its key properties, was recorded. The MIT tests were performed using molybdenum and tungsten, two metals that share significant properties with plutonium and served as viable proxies for it.

The test works, first of all, because the neutron beam can identify the isotope in question.

“At the low energy range, the neutrons’ interactions are extremely isotope-specific,” Danagoulian says. “So you do a measurement where you have an isotopic tag, a signal which itself embeds information about the isotopes and the geometry. But you do an additional step which physically encrypts it.”

That physical encryption of the neutron beam information alters some of the exact details, but still allows scientists to record a distinct signature of the object and then use it to perform object-to-object comparisons. This alteration means a country can submit to the test without divulging all the details about how its weapons are engineered.

“This encrypting filter basically covers up the intrinsic properties of the actual classified object itself,” Danagoulian explains.

It would also be possible just to send the neutron beam through the warhead, record that information, and then encrypt it on a computer system. But the process of physical encryption is more secure, Danagoulian notes: “You could, in principle, do it with computers, but computers are unreliable. They can be hacked, while the laws of physics are immutable.”

The MIT tests also included checks to make sure that inspectors could not reverse-engineer the process and thus deduce the weapons information countries want to keep secret.

To conduct a weapons inspection, then, a host country would present a warhead to weapons inspectors, who could run the neutron-beam test on the materials. If it passes muster, they could run the test on every other warhead intended for destruction as well, and make sure that the data signatures from those additional bombs match the signature of the original warhead.

For this reason, a country could not, say, present one real nuclear warhead to be dismantled, but bamboozle inspectors with a series of identical-looking fake weapons. And while many additional protocols would have to be arranged to make the whole process function reliably, the new method plausibly balances both disclosure and secrecy for the parties involved.

Danagoulian believes putting the new method through the testing stage has been a significant step forward for his research team.

In the future, he would like to build a smaller-scale version of the testing apparatus, one that would be just 5 meters long and could be mobile, for use at all weapons sites.

“The purpose of our work is to create these concepts, validate them, prove that they work through simulations and experiments, and then have the National Laboratories to use them in their set of verification techniques,” Danagoulian says, referring to U.S. Department of Energy scientists.

Danagoulian also emphasizes the seriousness of nuclear weapons disarmament. A small cluster of several modern nuclear warheads, he notes, equals the destructive force of every armament fired in World War II, including the atomic bombs dropped on Hiroshima and Nagasaki. The U.S. and Russia possess about 13,000 nuclear weapons between them.

“The concept of nuclear war is so big that it doesn’t [normally] fit in the human brain,” Danagoulian says. “It’s so terrifying, so horrible, that people shut it down.”

In Danagoulian’s case, he also emphasizes that, in his case, becoming a parent greatly increased his sense that action is needed on this issue, and helped spur the current research project.

“It put an urgency in my head,” Danagoulian says. “Can I use my knowledge and my skill and my training in physics to do something for society and for my children? This is the human aspect of the work.”

The research was supported, in part, by a U.S. Department of Energy National Nuclear Security Administration Award.