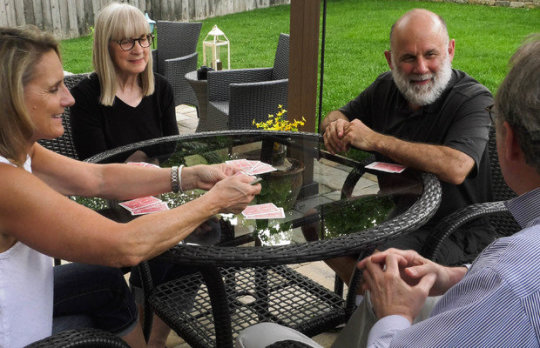 A strong social network could be the key to preserving memory.

New research from The Ohio State University found that mice housed in groups had better memories and healthier brains than animals that lived in pairs.

The discovery bolsters a body of research in humans and animals that supports the role of social connections in preserving the mind and improving quality of life, said lead researcher Elizabeth Kirby, an assistant professor of behavioral neuroscience and member of the Center for Chronic Brain Injury at Ohio State.

“Our research suggests that merely having a larger social network can positively influence the aging brain,” said Kirby, who is a member of the Neurological Institute at Ohio State’s Wexner Medical Center. Her research appears in the journal Frontiers in Aging Neuroscience.

“We know that in humans there’s a strong correlation between cognitive health and social connections, but we don’t know if it’s having a group of friends that’s protecting people or if it’s that people with declining brain health withdraw from their human connections,” Kirby said.

This study was designed to answer that hard-to-crack question with an animal model.

Some mice lived in pairs, which Kirby refers to as the “old-couple model.” Others were housed for three months with six other roommates, a scenario that allows for “pretty complex interactions.”

The mice were 15 months to 18 months old during the experiment — a time of significant natural memory decline in the rodent lifespan.

“It’s like mouse post-retirement age. If they drove, they’d be forgetting where the keys are or where they parked the car more often,” Kirby said.

In tests of memory, the group-housed mice fared better.

One test challenged the mice to recognize that a toy, such as a plastic car, had moved to a new location. A mouse with good brain health will gravitate toward the novelty of something that has been relocated.

“With the pair-housed mice, they had no idea that the object had moved. The group-housed mice were much better at remembering what they’d seen before and went to the toy in a new location, ignoring another toy that had not moved,” Kirby said.

In another common maze-based memory test, mice are placed on a well-lit round table with holes, some of which lead to escape hatches. Their natural tendency is to look for the dark, unexposed and “safe” escape routes.

Both groups of mice improved their escape-route search strategies with practice — but the research team was struck by the differences in the groups’ response to repeated tests, Kirby said.

The “couples” mice didn’t get faster at the test when it was repeated over the course of a day.

“But over the course of many days, they developed a serial-searching strategy where they checked every hole as quickly as possible. It’d be like walking as quickly as possible through each row of a parking lot to look for your car rather than trying to remember where your car actually is and walk to that spot,” Kirby said.

The group-housed mice improved with each trial, though.

“They seemed to try to memorize where the escape hatches are and walk to them directly, which is the behavior we see in healthy young mice,” Kirby said. “And that tells us that they’re using the hippocampus, an area of the brain that is really important for good memory function.”

The serial searching employed by the pair-housed mice is simpler, easier and doesn’t use that part of the brain, she said.

In humans, mice and many other animals, brain function in the hippocampus markedly declines with age, even in the absence of dementia. Exercise and social ties are known to preserve memory in this region in people, Kirby said.

After the housing experiment, the researchers examined the brain tissue of the mice and found increased inflammation in the pair-housed mice — biological evidence of eroded cognitive health.

“The group-housed mice had fewer signs of this inflammation, meaning that their brains didn’t look as ‘old’ as those that lived in pairs,” Kirby said.

The researchers also looked for evidence of new neuron growth in the hippocampus and found no differences between the groups.

Previous research in this area has primarily focused on mice that have highly enriched environments with lots of toys and opportunities for exercise and compared them with mice without as much to do.

This study goes further by showcasing differences that appear to be due to socialization alone, Kirby said. Future research should explore the molecular explanations for the connection between socialization and improved memory and brain health, she said.

Kirby said that people who are aging would do well to consider how their choices about where to live might impact their ability to be social.

“Something as basic as how long it takes to drive or walk to a friend’s house can make a big difference as we get older,” she said.

“A lot of people end up isolated not by choice, but by circumstance. ‘Over the river and through the woods’ might be fun for the kids, but it’s probably not so great for Grandma,” Kirby said.