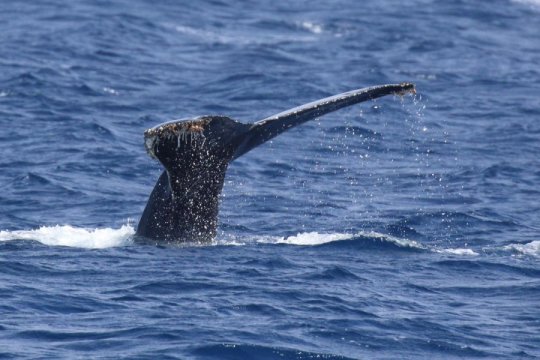 Male humpback whales reduce or cease their songs in reaction to human-generated shipping noise, according to a study published October 24, 2018 in the open-access journal PLOS ONE by Koki Tsujii from Ogasawara Whale Watching Association and Hokkaido University, Japan, and colleagues.

Increasing human shipping activity is causing a rise in low-frequency ocean noise. Baleen whales use low-frequency sound to communicate, so this human-made noise could affect their singing behavior. The authors of this study studied the effects of a passenger-cargo ship’s noise on the songs of male humpback whales living around the Ogasawara Islands in Japan. They used two underwater recorders to capture whalesong and locations of animals between February and May 2017, and examined the effect on humpback singing of the noise of the passing ship, the only large boat travelling in this remote area.

The authors found that fewer male humpbacks sang in the area within 500m of the shipping lane than elsewhere. After the ship passed by, whales within around 1200m tended to temporarily reduce singing or stop singing altogether, though they did not show other adaptations such as changing the frequency of their songs. Most of those whales who stopped singing did not resume their songs until at least 30 minutes after the ship had passed by.

Only male humpback whales sing, so these recordings cannot indicate if or how females and calves are reacting to the ship’s noise. The study also only captured 1-3 singing whales per day, and 26 singers in total. Nonetheless, these findings suggest that ship noise can temporarily affect singing behavior of humpbacks, and future research could investigate the effects of more continuous noise exposure as a possible stressor for the whales.

The authors add: “Humpback whales seemed to stop singing temporarily rather than modifying sound characteristics of their song under the noise, generated by a passenger-cargo liner. Ceasing vocalization and moving away could be cost-effective adaptations to the fast-moving noise source.”