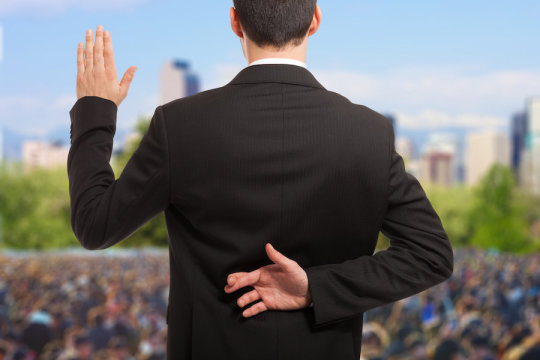 For decades, political scientists have measured the public’s trust in the federal government consistently, using measures that are largely unchanged since the 1960s — despite the momentous changes happening over the last five decades in the United States.

The new research, published in PLOS ONE, tested a vulnerability-centered definition of trust — meaning, defining trust as a willingness to be vulnerable to the actions of another. The results revealed three assessments that lead to one trusting in the government: whether it has the ability to do its job, the benevolence to care about its people and the integrity to generally do the right thing.

“We went beyond the question of, ‘do you trust government?’ to find out what the concept of trust really means. Our research presents new ideas for thinking about political trust and offers suggestions for how to refine it beyond what’s been done in the past,” said Joe Hamm, MSU assistant professor of criminal justice and lead author of the study. “Using previous trust measures, people view ‘happiness with’ and ‘trust in’ government interchangeably — which is something we wanted to break apart and dissect. This is critical for us to understand and consider, especially given shifts in what we perceive as trust in recent years.”

Hamm — who collaborated with MSU political scientist Corwin Smidt and Roger Mayer, professor of leadership in North Carolina State University’s Poole College of Management — recruited participants to complete an online survey about their perceptions of the federal government. Participants were asked about the extent to which they felt recent political scandals mattered, whether they felt as though the government positively affected the economy and the extent to which they believed government represented their interests.

“We then used a series of questions to specifically measure the three dimensions of ability, benevolence and integrity,” Hamm said. “Unlike the trust surveys used for decades, our questions focused specifically on the characteristics of government and how those characteristics impacted one’s comfort in allowing the government to have power over parts of their day-to-day lives.”

These more specific questions allowed for greater insight into how and why big issues, such as the economy and political scandals, may impact trust, Hamm said.

Data from the survey largely supported the researchers’ arguments, such that while prior measurements of trust are not necessarily inaccurate, context and nuance matter.

“We can do better in thinking more critically about the psychological nature of trust,” Hamm said.

The current research seeks to the lay the groundwork to eventually refine how political think tanks, pollsters and campaigns measure trust, Hamm said, and it may prove especially relevant looking ahead to the presidential election.

“We shouldn’t ask whether or not you trust a politician — it’s how you trust him or her, and what you’re willing to accept vulnerability for,” Hamm said. “If you’re a candidate looking ahead to the 2020 election, there are different things to consider to be someone constituents like versus one that they trust.”