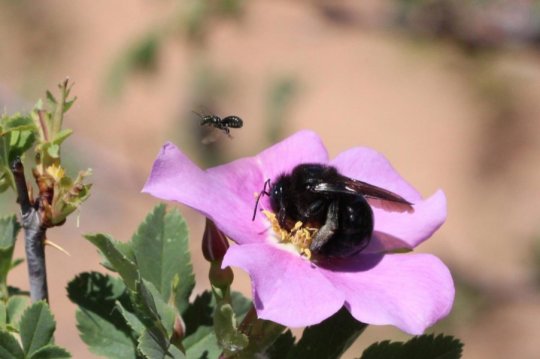 The state of Utah’s nickname is “The Beehive State,” and the moniker couldn’t be more apt, say Utah State University scientists. One out of every four bee species in the United States is found In Utah and the arid, western state is home to more bee species than most states in the nation. About half of those species dwell within the original boundaries of the newly reduced Grand Staircase-Escalante National Monument.

Now, in a follow-up paper published Dec. 4, 2018, in the same journal, Wilson, Carril and New York-based free-lance journalist Matt Kelly, examine data on the 660 species to focus on what the newly reduced monument boundaries mean for the pollinators left out of protected areas.

It’s been exactly year, since President Donald Trump announced, in Salt Lake City, his intention to sharply reduce Utah’s Grand Staircase-Escalante and Bears Ears National Monuments. What does this mean for pollinators inhabiting those areas?

“That’s exactly the question that should be asked, that’s not being asked,” says Wilson, lead author of the latter paper. “So that’s what my co-authors and I, using data from the first paper, have examined.”

The good news is 87 percent of the 660 species identified by the USU scientists are found in the newly reduced boundaries of GSENM.

“But that leaves about 84 species no longer inhabiting protected land,” Wilson says. “This includes some new, undescribed species, as well as ‘morphospecies,’ which are unique individuals that don’t match known species.”

Further, he says, some species known only in the Mojave Desert are among the pollinators found in the now unprotected area.

“This is significant because these are ‘edge’ populations,” Wilson says. “That is, in the face of climate change, they could be the first to go extinct as the region gets hotter and drier, or the area could provide a refuge for populations of the same species now inhabiting the Mojave desert.”

A broader concern, he says, is the lack of consideration of pollinators in the monument’s new management plans.

“Will the reduction in monument size affect the pollinators?” Wilson asks. “We don’t know. But if development is allowed in the unprotected areas, say, mining, road development, more recreational development than, yes, pollinator habitat could be lost.”

He notes President Clinton specifically mentioned pollinators, when he led the creation of the national monument in 1996.

“Bees need to be a part of the management decisions,” Wilson says. “People should be aware of their pivotal role in our ecosystems.”

Materials provided by Utah State University. Original written by Mary-Ann Muffoletto. Note: Content may be edited for style and length.