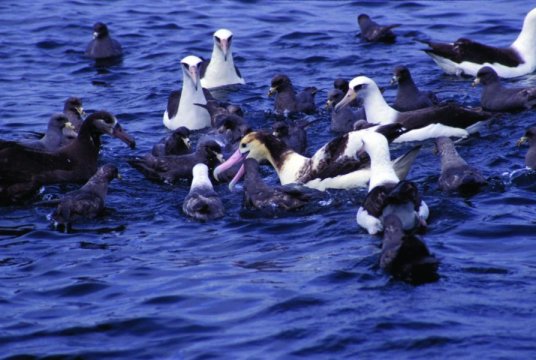 In the 1990s, the endangered status of the short-tailed albatross catalyzed efforts to reduce the number of birds accidentally killed as bycatch in Alaska, home to the country’s biggest fisheries. Marine fisheries scientist Ed Melvin, at Washington Sea Grant at the University of Washington, and research associate Kim Dietrich, an independent contractor, were at the forefront of a collaborative research effort that led to Alaska’s longline fisheries adopting streamer lines in 2002, a technology that is towed behind vessels to create a visual barrier that keeps seabirds away from the baited hooks below.

In a new study published Jan. 28 in the journal Conservation Biology, Melvin, Dietrich and partners from Oregon State University and the Alaska Fisheries Science Center show that in the time since they were adopted, streamer lines have had an extraordinary impact: seabird bycatch in Alaska’s longline fisheries has been reduced by 77 to 90 percent, saving thousands of birds per year including hundreds of albatrosses.

Melvin said much of this success is thanks to the fishing industry’s active involvement when the team was researching methods to avoid seabird bycatch two decades ago.

“It’s really to the industry’s credit that they were fully engaged in the research and started implementing streamer lines two to three years before they became mandatory,” Melvin said. “The fishermen owned the solution from start to finish.”

The solution also involved training fisheries observers to properly identify seabirds in order to record vessel bycatch. “The data they were able to collect over decades allowed us to monitor and estimate bycatch rates and track the success of this effort,” said co-author Shannon Fitzgerald, a fisheries scientist at the Alaska Fisheries Science Center.

The researchers arrived at their results by analyzing 23 years’ worth of this meticulously collected fisheries observer data. While they found that bycatch rates remain much lower than the pre-streamer line days, more recently the number of birds hooked has been increasing.

“We have seen a continued increase in seabird bycatch, especially albatross, in Alaskan longline fisheries, with one of the recent years after our study the highest since 2002,” said co-author Rob Suryan, a wildlife specialist at Oregon State University and research ecologist with the Alaska Fisheries Science Center.

In parsing out this trend, the researchers realized that bycatch significantly varied by both fishery and type of bird. The three species of highest conservation concern — the albatrosses — were more likely to be snared by a sablefish or halibut vessel than one that fishes cod. Other bird species, however, were more likely to be hooked by boats that fish for turbot, a type of flatfish.

The researchers looked into the success of other methods of bycatch reduction as well. Fishing at night, when many seabirds are less active, is a tactic commonly used elsewhere in the world. They found that fishing at night dramatically decreased bycatch rates of albatrosses while increasing the fish catch rates of Alaska’s longline fleets — however, it also increased the accidental capture of northern fulmars by 40 percent.

While northern fulmars are not a species of conservation concern, the possibility of accidentally catching more of these seabirds certainly presents an unwelcome tradeoff. Melvin added that many fisheries operate in the summer, when Alaska’s high latitude makes for very short nights; requiring night fishing could hurt the industry by substantially cutting down on the available fishing time.

Importantly, the scientists found that in recent years fewer than 2 percent of the 300 vessels they analyzed accounted for 46 to 78 percent of the bycatch. The authors said it is not clear why these particular boats caught so many birds. Perhaps they encountered unusually aggressive birds that were unable to locate natural prey, or perhaps they represent a newer generation of fishermen who do not feel the same urgency around seabird conservation because they were not working when the issue was first raised.

Whatever the reason, it suggests it’s possible that resource managers don’t need to rethink their entire seabird bycatch strategy. Targeting the few vessels with anomalously high bycatch rates with outreach about the proper use of streamer lines could prove to be enough.

This study was funded by The David and Lucile Packard Foundation and the National Fish and Wildlife Foundation.

Materials provided by University of Washington. Original written by Samantha Larson. Note: Content may be edited for style and length.