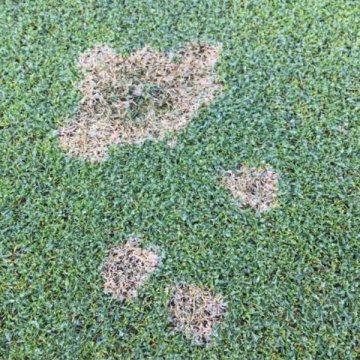 Dollar spot — the most common, troublesome and damaging turfgrass disease plaguing golf courses — is becoming increasingly resistant to fungicides applied to manage it, according to Penn State researchers.

An aggressive and destructive disease caused by the fungal pathogen Clarireedia jacksonii, dollar spot overwinters in plant tissues, often re-emerging in multiple epidemics throughout the year over the spring, summer and fall. The symptoms on highly maintained, closely mown turf typically consist of small patches of bleached plants that are unsightly and can affect playability of putting greens or fairways.

In the northern United States, more money is spent on fungicides aimed at controlling dollar spot than any other turfgrass disease, pointed out researcher John Kaminski, professor of turfgrass management and director of the Golf Course Turfgrass Management Program in the College of Agricultural Sciences. He noted that golf courses spend hundreds of thousands of dollars applying fungicides six to nine times a year to control the fungus.

“But those repeated fungicide applications act as a selection pressure on fungal populations and may lead to reduced field efficacy of certain active ingredients,” he said. “That selection pressure is a driving force favoring the dominance of resistant isolates in managed turfgrass systems. Not only can fungicide resistance result in increased spending on fungicides, but the loss of active ingredients due to resistance may limit available control options for turfgrass managers.”

READ  Offbeat: How the effectiveness of the National Forest Conservation Program could be increased --

To determine the extent of fungicide resistance in dollar spot fungus, researchers obtained 681 samples from 45 golf courses and research plots in Pennsylvania and surrounding states and tested for their resistance to multiple chemistries from four different chemical classes. Samples were taken from turf in various management sites, such as greens, tees, fairways and roughs, at each golf course.

Samples collected at Vineyard Golf Club in Massachusetts — where herbicides and pesticides are not permitted and never have been applied — were used as a control in the study, representing Clarireedia jacksonii fungus that had never been exposed to fungicides and therefore harbor no resistance.

Kaminski knew about the Martha’s Vineyard course because, before coming to Penn State he worked in Connecticut. In previous research conducted in New England, he used the Massachusetts course as a control.

READ  Offbeat: How the arts can help students who struggle most --

“It’s the standard that we compare everything to because the pathogen populations we isolate from that course are completely sensitive to the fungicides,” he said.

Researchers saw high levels of fungicide resistance in dollar spot isolates from many golf courses. Depending on the fungicide, they documented resistance ranging from 41 to 85 percent compared to fungus samples from Vineyard Golf Club in Massachusetts.

Kaminski suggested that the research findings, published online this month in Plant Disease, have significant, environmental and financial implications.

“If we can document fungicide resistance, and we know where that resistance is, we can work with golf course managers to fine-tune their programs to use the right fungicides, and less overall fungicide,” he said. “If we correctly assess the scope of resistance across Pennsylvania, we can calibrate our management to get the desired level of disease control with fewer inputs.”

Also involved in the research was Cameron Stephens, a former graduate student in the Department of Plant Science who is now a doctoral student at North Carolina State University. Peter Landschoot, professor of turfgrass science, collected samples from the Vineyard Golf Club in Massachusetts, and dozens of golf course superintendents across Pennsylvania collected and submitted turfgrass samples.